From Wikipedia (the source of all knowledge, truth, wisdom.  And all for free).

Time is the indefinite continued progress of existence and events that occur in apparently irreversible succession from the past through the present to the future.  Blah blah blababdy blah…

OK , I added the blababdy blah part but whatever….

I mean after all, isn’t time somewhat arbitrary?   I imagine, and can only imagine -because my impatience keeps me from reading more than the first paragraph of the Wikipedia article and even then only some of the words – that there are scientific and logical arguments that prove time to be something other than arbitrary.  If I force myself to look farther down the Wiki page I see words like “physical qualities” and “temporal measurement”.  Huh?…

The article began to catch my interest and as I read further I saw that J.M. E. McTaggart’s 1908 The Unreality of Time argues that, since every event has the characteristic of being both present and not present (i.e., future or past), that time is a self-contradictory idea.  Apparently old J.M.E. was a deep thinker and something called an Idealist Metaphysician.  Cool title but how much could that job pay, right??

“But wait Mike”, you might say.  “I follow this blog to read about Golden Kali, and her little sister Kloe, and to see all those cute pictures of their antics and sweetness.  If I want to read science and hear fact-based philosophical arguments I’ll get that info like everyone else does by turning to social media and reviewing the seemingly endless stream of memes that monopolizes my feed”.

OK, fair point.  So on to the real purpose of this post.

One year ago today we brought a nine-week 15 pound puppy home that we named Kloe.  Kloe doesn’t give a woof about time except if it’s time to eat, or time to walk, or time to play, or time to cuddle.  Those are concepts of time Kloe can relate to.   Kloe time.  But, in “the continued progress of existence and events” it is has been a year, and now at one year and nine-weeks old, Kloe is exactly the same pup she was one year ago.  Except now she is 65 pounds heavier and a few feet  longer.

One year, one pup, and one heck of a lot of love and fun this sweet girl has brought into our life.  I might have remembered anyway but in the spirit of full disclosure here is the real reason I knew that it was one year ago today that we brought Kloe home:

Yep – it was in my Facebook feed: “One Year Ago  – see your memories”.  And there were two pictures of Kloe the day she came home.  I smiled, paused for a few moments to reflect, and then scrolled down through the endless stream of memes looking for fake news.

Thank you Facebook for bringing a very special piece of the time continuum to my news feed.

Thank you Kloe for all the licks, laughs, and love during the past year.

Kloe at one year 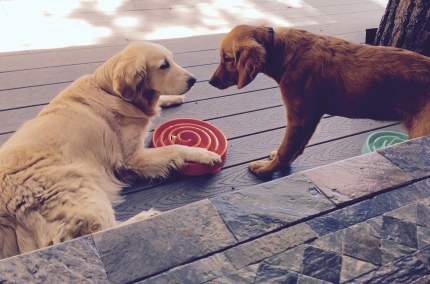 Stare down over the lodged apple 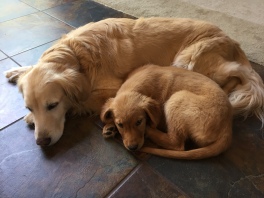 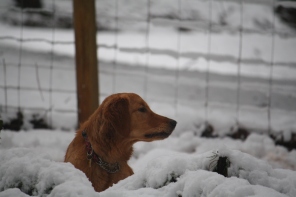 You definitely had it right on FB a year ago. Absolutely nothing wrong with puppies. Here’s to more fun and adventures with the ever affable Kloe girl.
P.S. LOVE your new header!

It doesn’t seem that long ago that Kloe joined your family! Just goes to show that there are some good aspects of Facebook after all!

A true love story- a man and his dog(s).

Wow Mike…. was it really a year ago? (rhetorical question!) As I was momentarily stunned by this anniversary announcement, by brain coughed up the facts that Ray will be 7 later this year; he has been with us for over 4 years, and quick math tells us that he has spent over half his life with us!
However one attempts to define time, it is most certainly capable of flying! 🙂