Meals for Kali and Kloe was the first thing that came to Holly’s mind.  She went to the cupboard where the dog food is stored and began dishing out meal sized portions into plastic resealable bags.   She put them all into a large paper bag and set it by the door.   This is where Holly’s mind was when, yesterday for a few hours, we thought we might have to evacuate our property due to a wildfire in our area.

As it turned out we were never at risk but there were a few hours where we weren’t sure.    So we went into action.

Car keys?  Check.  Wallets? Check?  Dog food?  Check.   OK – we’re good to go.  “Wait.  How about clothes” I said.  Holly answered:  “Don’t be silly Michael – the dogs don”t have clothes.  Me:  “They have tooth brushes, why not clothes?”  Holly:  “You’re right, with all the food I packed for them we’ll need to stay up on their brushings.  I’ll pack their tooth brushes.”

OK, maybe that wasn’t the exact dialogue but it could have been.

In times of crises or emergency everyone reacts differently.  Panic,  fear, and indecision. Jump into action, organize, and take charge.   And in our case I guess our reaction was “take care of the girls”.

My mind went to thoughts about how the night would go if we had to bug out.  We’d jump into the car with Kali and Kloe and the plethora of pre-packed food bags.  We’d drive as directed by the fire crew into safety.   But what if nearby friends also had to evacuate.   Where would we spend the night?  Could we find a motel in the area that allowed dogs?  Would we just sleep in the car cuddled up in the back with the girls?   I remembered that the fairgrounds had been a shelter for people evacuated during another recent fire.   They were accepting livestock and pets in addition to people.   I thought they probably wouldn’t allow the dogs to sleep where the people slept.  They would probably have them sequestered outside in a giant pen or crates.   I thought if that was the case then I would ask to sleep with the animals because my girls would be scared without us in a strange place with other unknown animals.

Yep, that’s where my mind went.  Take care of the girls and the rest will take care of itself.

So, thank goodness, it was a non-event and after a non-eventful evening we headed off to bed.   I thought back about how we could have been sleeping at the fairgrounds.  Holly on a cot with the humans and me sharing a crate with Kali and Kloe amongst the livestock and pets.   It made me feel good to know that I would do that if necessary (I would) and I felt the girls somehow knew too.

We got into bed and I waited for the girls to settle in on their mattresses by the sides of our bed feeling grateful to be safe and at home.  Then my bubble was burst as Kloe went back into the kitchen to sleep on the cool tile and Kali went into the bathroom to sleep on the tile there.  So much for gratitude.   But in the end I guess they were grateful.  Grateful for the cool tile after a triple digit summer day and oblivious to what could have been under less fortunate circumstances.

That’s was fine with me.  Sleep tight girls.

SIMULATION:  Me and the girls sleeping at the fairgrounds with the rest of the livestock and pets. 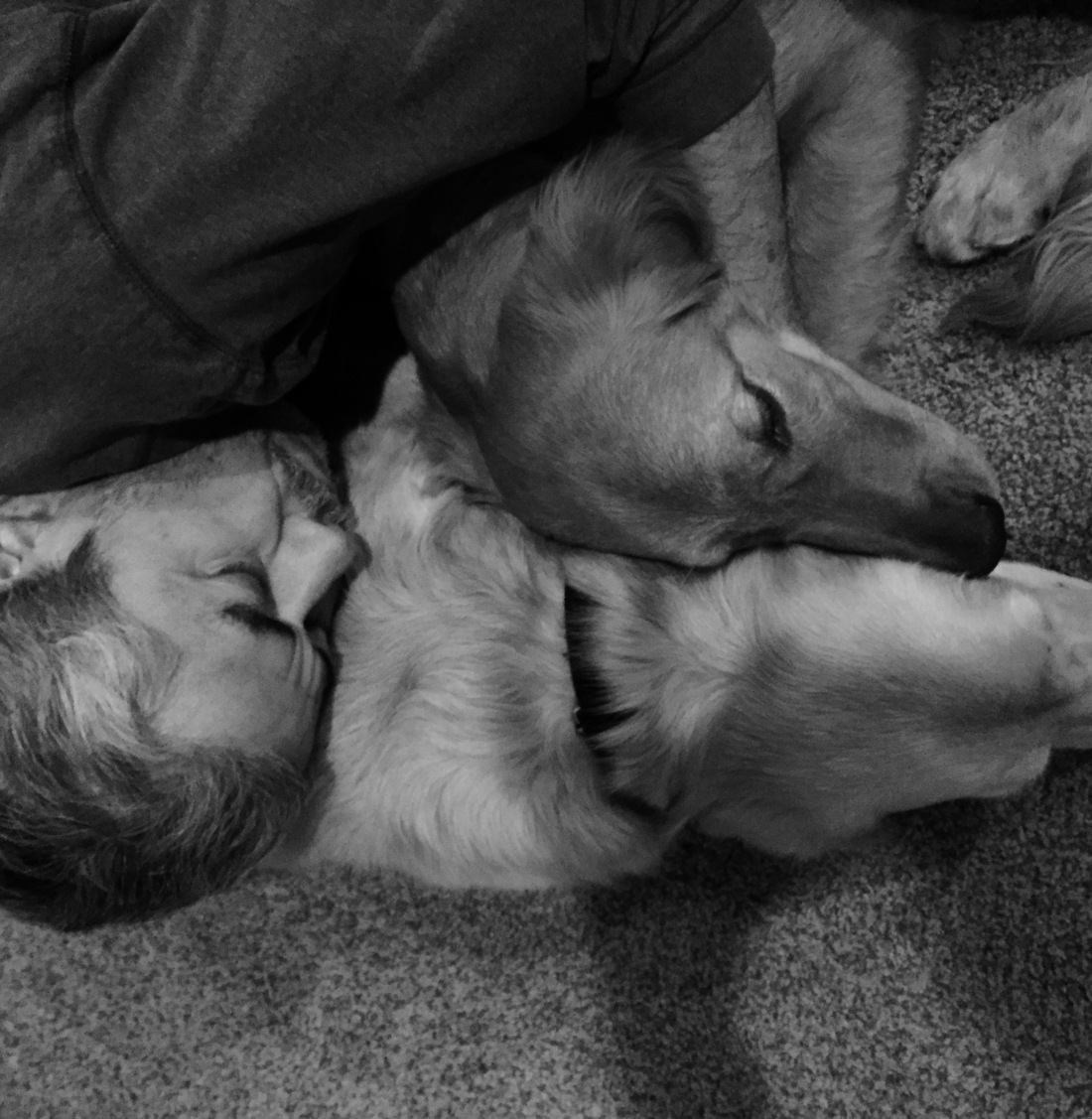 A couple of months ago I decided to merge my other blog site called The Golden K with this Golden Kali site.  The merging of the K’s was a failed experiment. You can read about it here:  The Golden K Is Back.

Kali in her infinte wisdom has asked me to revive the blog site called The Golden K in order to make a clear distinction between her beauty and that of our home in the Sierra Nevada Foothills that we call The Golden K.

In case there is any confusion you can find us in these three places in the blogosphere:

Kali and I send our best wishes and a heartfelt thanks for following us.

Many canine breeds are good with children and Golden Retreivers are one of the best. The American Kennel Club places Goldens fourth after the Bulldog (1), Beagle (2), and the Newfoundland (3).  Labs at number 5 were right after Golden Retrievers.

When Kloe first joined our pack it took her a few days but she eventually engaged Kali in play.  All of 15 pounds when she came home Kloe would run full speed at Kali nipping at her ears and bouncing off Kali’s torso, hips and head.  It was warming to see Kali, at 60 pounds, play so gently with Kloe instinctively knowing that Kloe was obviously smaller but also a “baby”.  During tug-o-war Kali could have shaken the rope toy hard enough to launch Kloe into the air but she didn’t.  She would hold on lightly and allow Kloe to gain some ground.  Kloe would eventually tire, lie down on her belly,  and Kali would drag her along the carpet or kitchen tile for a ride.

A little over a year later its fun to watch Kloe, now at 80 pounds, approach her big sister much in the same way she did when she was just a bitty pup.

Kloe still blind sides Kali at full speed, often with a toy in her mouth, daring Kali to fight back as if Kali has a choice.  The difference now is that Kloe has a 20 pound advantage over Kali who has to go full strength as a matter of self preservation.  And some games never change. Often after several minutes of tug-o-war Kloe will lie flat on her stomach, front and back legs fully extended, and Kali drags her along the carpet and Kitchen tile.

Until recently Kloe had not been around any young pups and I wondered how she would act if she was.  At only fifteen months does she possess the same instincts that seven year old Kali demonstrated with her baby sister a year ago?  Kloe has always had just one speed during play: 11 of on a scale of 10.  Through training and to some degree maturity (did I just use the word maturity in a sentence with Kloe?!?) Kloe is calmer around people when she first meets them.  It’s hard for her but she is learning what’s expected and keeps all her feet on the ground while wagging her butt feverishly.  Usually there is a thought bubble over her head that says, “Hi!  I love you!  Do you see me?  I am really really glad you are here!   Do you see me?  Did I tell you I love you?”

The young pup that Kloe met recently was not of the canine persuasion.  It was a human baby.  Perri is the granddaughter of our friends Marty and Jen.  We were at Marty and Jen’s for a BBQ when Perri was introduced to Kloe.  Kloe was very interested and saw that this was a person who just happened to be very small and very young.  In fact Kloe and Perri are just about the same age.   Kloe probably instinctively knew she had an advantage in most major categories:

Kloe laid at grandpa Marty’s feet while he held Perri in his lap.  She was fascinated and so very calm as she watched Perri’s every move.  I believe that with any dog, and I mean any dog, one must be very cautious with babies and they should not be allowed on the ground with the dog nearby until both parties – dog owner and parent/grandparent – are sure it’s safe.

So was the case with Kloe and Perri.   Perri was eventually allowed to sit on the ground near Kloe.   Our 80 pound bundle of energy 11 on scale of 10 “puppy” laid there calmly next to Perri and just hung out with “the baby” and let her do her thing.

But just for good measure, and so Perri knew that she loved her, Kloe gave Perri a little kiss on her nose, captured in the video below.

Take that Bulldog, Beagle, and Newfoundlanders!

When Kali arrived from Taiwan in 2014 she arrived with a brown scarf.  At the airport one of the volunteers that was assisting with her transition to our care took off the brown scarf and replaced it with a scarf with red, white, and blue markings that represented the American flag.   Kali was now an “American Girl”.

So beginning with that 2014 4th of July it became a tradition for Kali to don that same scarf and take a photo.  A photo that represents our collective patriotism but more importantly our thanks to the Taiwanese care givers who rescued Kali and sent her to America and to me.  Thank you Jade Lo and team.  Kali and I salute you and honor you for your the work you and your team do for so many dogs in need.

Happy Birthday America from Golden Kali at The Golden K

When I turn into the driveway of the Golden K, my body tingles with anticipation of seeing “my girls” who will greet me at the gate or inside the house.

If they’re outside Kali and Kloe will trot to the rod iron gate at the first sound of my truck rolling up the Golden K driveway.  They watch me pull into the car port with their tails wagging and anticipating our physical and verbal greeting ritual.

If they’re inside the house I can usually see them through the windows of the doors.  Kali is usually sleeping right by the door and Kloe somewhere near Holly. As the door to the kitchen opens Kali springs to her feet and Kloe runs in to join us.  Kloe’s a little pushy and will always come to the front of the greeting line while Kali hangs back and patiently waits for her turn.The anticipation and intensity of the ritual increases the longer the time I’ve been away.

Recently, both my mother and sister have been very sick.  It’s been a difficult few weeks and the seven hour round trip to and from the SF Bay Area to help with their care during this period took me away from my girls for several long days and a few over nighters.  The worry took an emotional tole and the hours driving, often in heavy traffic getting into or out of the West Bay, has been fatiguing.

But when I arrive back home and pull into the driveway the tingling begins and it slowly becomes better because of the healing powers of dogs.   In my case two very special, sweet, and tender dogs that in many ways define the Golden K.

Kali and Kloe.  My girls, my medicine, and my therapy.  My Golden therapy.

The driveway leading to The Golden K and my Golden Therapy 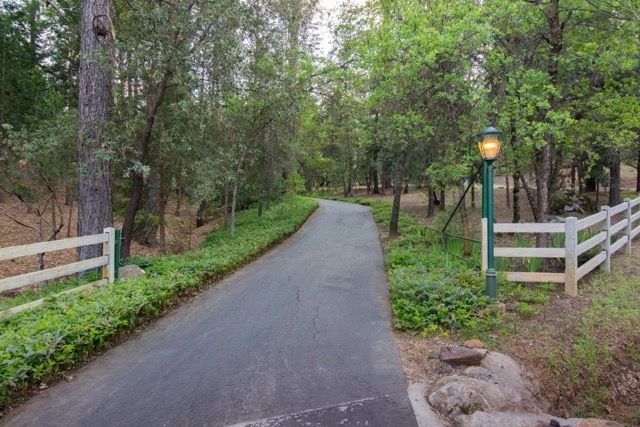 The Girls chilling’ in the back of my truck 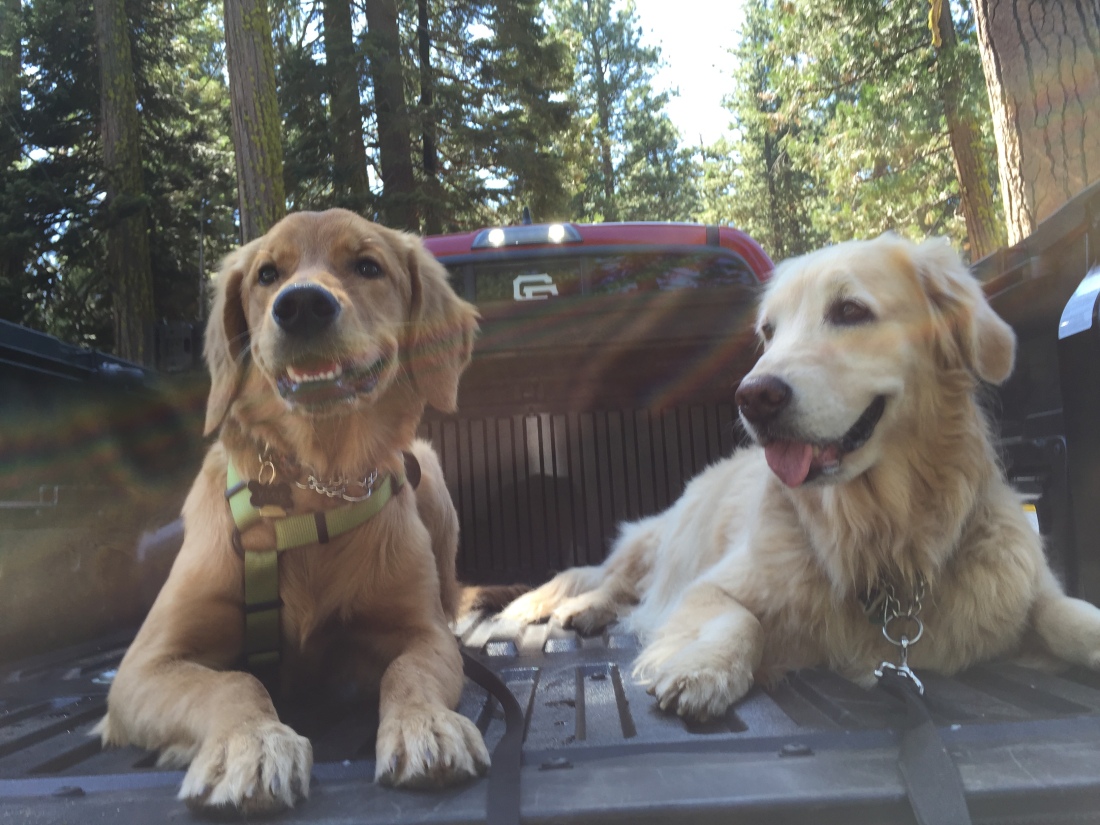