I remember years ago a friend showing me a video of their toddler getting a bath.  It was about 30 minutes of water, splashing, water, and then more splashing.  I thought to myself, “well this is quite boring”, while saying out loud, “how cute!..”  And of course, “videos” back in the day were quite blurry and low quality even when one would spring the extra buck or so for the “HQ” 60 minute video tape.

So with that mindset established this post is my daddy dog-owner version of a boring home video.  The good news is that these videos are comprised of less than one minute, slightly better quality than tape thanks to Mr. Jobs, and you’re not trapped in a living room in front of the TV with your friend asking, “hey – want see some videos of my kid?”

Kali had a recent unexpected visit from a couple of my friend’s dogs Jaynee (Piper’s sister) and Sadie.  This visit was much to Kali and Smokey’s surprise (how would they know, right?) and I was pleasantly surprised to see what good hosts they were.  After a couple of minutes of barking, posturing, and butt smelling the four of them got along swimmingly spending a couple of hours romping in the yard and exploring the house.

Kali doesn’t get a lot of doggie play time and now that she’s much more comfortable around other dogs I’m trying to find opportunities for her build on her socialization skills. So like any proud dad I diligently recorded a few moments of play time for posterity but mostly because it’s a lot easier these days to pull out a iPhone instead of a 20 pound VHS video camera who’s battery was usually dead when you needed it the most!

Oh, and feel free to say in thinly veiled sarcasm, “how cute, wow, my dog never does that, your dog is the only dog to ever get a bath run around and play.   Don’t worry – you won’t hurt our feelings.

Holly is a pre-school teacher.  When it rains the kids can’t go outside for recess.   On those days she has to conduct “Rainy Day Recess” inside the classroom.   Miss Holly likes the rain so long as it is not on the days she works and during the hour that recess takes place.  I kid her with a play on words from the 1971 hit by The Carpenter’s, “Rainy Days and Mondays”.  I tell her that rainy days and recess always get her down. Miss Holly doesn’t think this is funny.

Kali however loves Rainy Day Recess.  On one hand Rainy Day Recess for Kali usually means no walk. My choice not hers.   On the other hand RDR usually means getting a Bully Stick. Something that keeps her occupied and happy for a long time.  It’s similar to putting on a video for my kids when they were toddlers and couldn’t go outside because of rain or some other reason.

My kids loved videos.  Remember videos?  Those big clunky things that were never rewound when you took them out of the Blockbuster case.  And the video players that were about as big as a microwave when they first went on the market.  Weren’t those cool!  How about 8 tracks?  Anyone remember them?  Sorry.  I digressed into nostalgia land when this post was supposed to be about Rainy Day Recess and Bully Sticks…

Yesterday Kali and I went to the pet store to stock up on various items. One of them was Bully Sticks.  She picked out three very nice looking sticks about 12 inches long and about an inch thick.  This size is perfect for Kali because she can’t just gobble them down like smaller chew toys.  She’ll work on one for as long as I allow her to methodically tearing off small pieces until the 12 inches becomes 11, and then 9 or 10, and then I usually stop her because too much of a good thing is not good.  Except for wine…

So this morning – even though it was not raining yet – I declared Rainy Day Recess.    I really felt like futzing in my office most of the morning so I made the declaration.  Holly was at Yoga and Kali was sleeping so this declaration was mostly in my mind.  And in this pee brain of a mind that I have there was a royal messenger that appeared in a uniform that would make Liberace blush with an open scroll in hand.  He hollered for all present in the town square to hear, “By a proclamation from the Gods themselves, today shall be a Rainy Day Recess without walks but with a full compliment of Bully Sticks.”  From the back of the crowd I see a small Oliver Twist looking tyke put up his hand and ask if he can watch a video instead.  Mr. Bumble appears and grabs the boy.  But wait, I digress again…

When Kali has a Bully Stick she looks at me with gratitude in her eyes. As she’s chewing if I call her she’ll look up with her big brown eyes and seem to say, “I love you so much; almost as much as this bully stick.  And by the way rainy days and recess never gets me down.  Can I go on chewing now?”

And so it was this morning. This Sunday morning with Rainy Day Recess and bully sticks.

“BY PROCLAMATION TODAY SHALL BE A RAINY DAY RECESS” 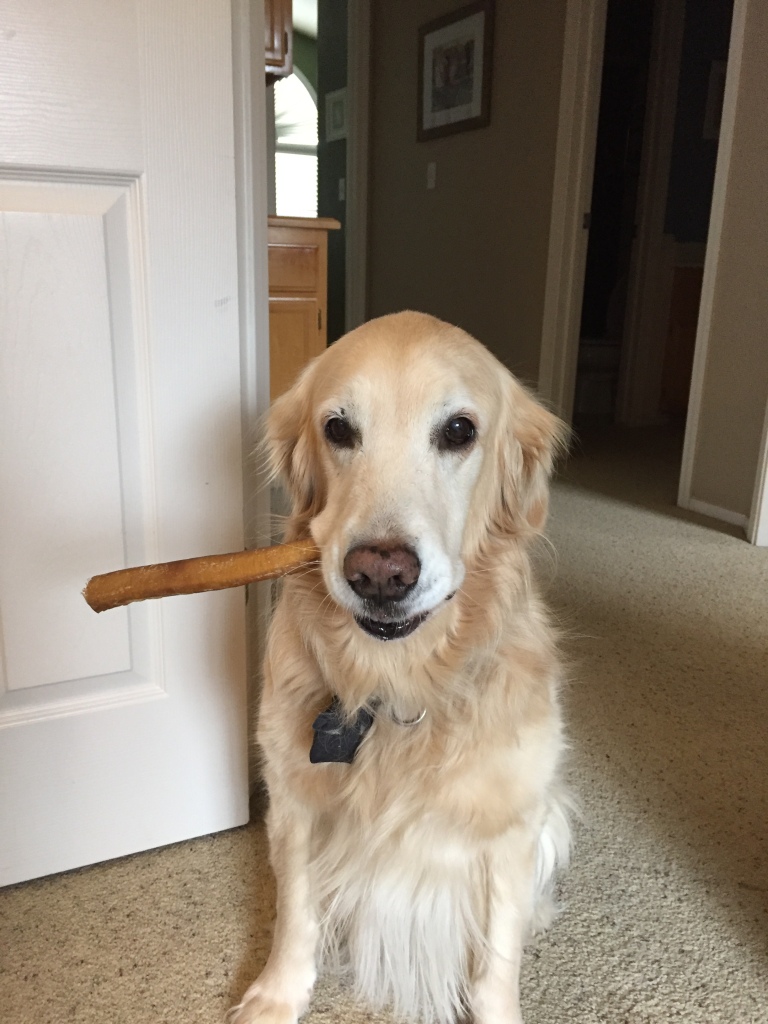 Got a light?  Just kidding – it’s a Bully Stick!

Even Smokey enjoys a Rainy Day Recess one in a while

“Hey Dad, you know what would be real cool?  If you put on a video of All Dogs Go To Heaven and I could watch it while I chew on this Bully Stick”

Sing out the old, bring in the new.  Should auld acquaintance be forgot and auld lang syne! Whatever…

Even as a young adult I never enjoyed New Years Eve.

I never liked the pressure and expectation I felt of having to stay up late and have fun “ringing” in the new year.  During the early years of our marriage our friends would urge us to come out for New Years and have fun.  We usually declined because we preferred to be home and in bed at our usual hour.   Later when our children were teenagers and young adults I grew to hate New Years because I worried that my kids were going to make a bad decision at the party they were at or would be on the road late at night with all the real and imagined dangers I laid awake worrying about.

Now my kids are grown, two of them married, and one still at home.   I worry less about them but always feel better waking up New Years Day knowing everyone is safe and we can now get past all this silliness of “New Years” and move on with life.  Yes, I know – what a Scrooge I am!

This year was a little unique in that one of my kids was on vacation in Paris with his wife.   So at 3:15 PM Pacific Time I text him and said “hey – I just realized it’s the new year in Paris. Happy new year”.  Jonathan replied (in his usual dry humor), “Indeed.  Happy New Year from the future…”  My other son was on a plane with his wife flying home to Illinois after spending the holidays in Southern California with her family.  Michael text me about 10:15 PM and said, “happy new year from the central time zone”.  They had made it home from O’Hare just in time for midnight – their first new years eve as a married couple.

My daughter was home and in bed by 10:00.   I knew she would have rather been somewhere else celebrating.  But not much was happening and she stayed in for the night sharing dinner with us and hitting the sack early.  I felt a little bad for her but inside I was happy that I could retire not having to worry about her getting home.

And then there is my Golden Kali for whom December 31 really is just another one the 364 and 1/4 days per year.

Except for the “boom-booms”.  The boom-booms began at midnight and lasted for about 30 minutes.

As expected, they spooked Kali and made her uneasy.  The firecrackers and other means of “ringing” in the new year make Kali very skittish.   She experienced the same thing this past July 4th.  After last night I know I’ll need to get something (hopefully something natural) that I can use to  proactively help her stay calm during periods of foolish (see, what a Scrooge I am!) celebration and also during the occasional thunderstorm (which will occur more regularly later this year but more on that in a future post).

Kali and I began our day like most others: rising relatively early, breakfast for Kali, coffee and the sports section for me, and so on from there.  I have to admit that as much as I dislike New Years Eve I have always really liked News Year Day.  Part of the reason is that New Years Eve is over with and the other part is that during the morning much of the neighborhood and town is asleep from to much ringing, singing, and auld lang syne-ing the night before.

Like almost every other morning, Kali and I walked along our creek trail out to the pond and back along the fairways of hole number four and five of the recently closed golf course.  It was just another morning except the world was just a little more quiet than usual because of the aforementioned sleeping singers, ringers, and syners.

So 2016 begins just as 2015 began and ended:  by waking up next to my bride of 33 years whom I remain desperatly in love with, by thinking about my kids spread around the globe that I am so proud of, and with a dog by my side waiting patiently for me to get up so that we can get on with our routine and enjoy this, which is just another day.