As I write I look over and see a puppy sleeping very soundly under the kitchen table.   Her older sister lies not too far away on her day bed also asleep but not quite as soundly.  Instinctively, and from 10 months of first hand experience, big sister knows that at any moment the puppy could wake up and launch an all-out surprise attack with a soggy cloth toy or a plastic chew toy and almost certainly with attitude and unbridled enthusiasm.

Kloe the “puppy” turned one year old this weekend.  Yes, it took a whole weekend for this to happen because when you go from zero to 75 pounds in one year it takes a few days to make the transition from puppyhood to, well more puppyhood.  That’s how it is with Goldens.  They start out as puppies and sometimes never grow out of it and if they do it takes at least a few years.  So much to her big sissy Kali’s chagrin Kloe will continue chewing on Kali’s legs, smashing toys in her face, and making countless surprise attacks initiating marathon wrestle-mania  bouts for at least another couple of years.

A little over a year ago as Holly and I began packing up 25 plus years of suburban life to move to the mountains we brought a puppy home.  There were many who said we were crazy to add a puppy to our family during such a hectic and transitional time in our lives.  They were right.  The moment we met Kloe – just 15 pounds at the time- we were crazy in love with her.  And I’m pretty sure Kali was too.

So zero to 75 in one year.  Wow!  We think she has stopped growing.  Kali prays for the same.  Meanwhile, all of us remain crazy in love with our giant golden red puppy we call Kloe.

Happy Birthday Sweets. It’s been one heck of a first year.  I love you! 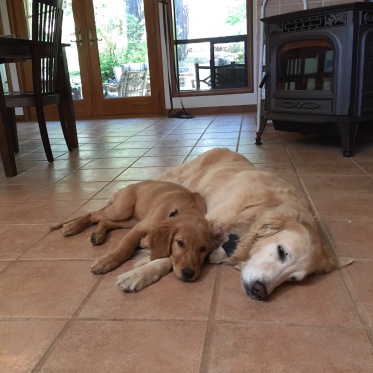 Home in the mountains 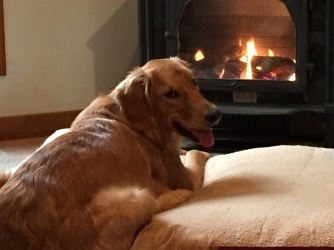 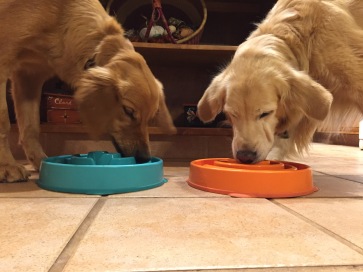 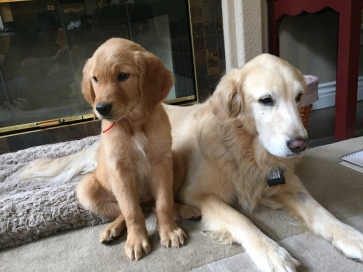 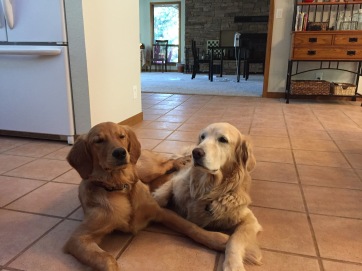 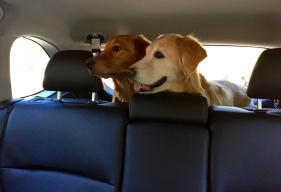 Stare down over the lodged apple

Kloe and Kali in the early days

Love your writing style! This is the first time I’m on your blog, but I feel like I’ll be back! 🙂
Happy birthday to Kloe! She looks like an adorable puppy, living the life! 🙂

Thanks for stopping by and sniffing around. We hope to see you often.

This post and the photos gave me goosebumps. A very happy birth day to “little” Kloe. And to Kali . . . your little sister is one year closer to being a calm grown up . . . hopefully . . . maybe. 😉

Isn’t it odd how sometimes doing something “crazy” turns out to be the exact right thing? Kloe is the perfect addition to your family, and you were the perfect family for her! And thanks for sharing the photos. They’re all great, but for some reason, I really like the one with their paws crossed next to the refrigerator the best.

Thanks Ann. Like with kids if you wait for the “right time” to have them you never will. I can’t imagin life without our puppy beast. Take care.

You and Holly struck gold! And so did Kloe!

Your ‘baby’ is too adorable and your seasoned girl just too sweet. Completely love that muddy pup pic. Definitely one of those “oh that dog” photos that will make you smile ‘furever!’

I love these two pups SO much. Some wMifht say so much it’s unhealth but I sa that my good health is due in a large way to them. Sigh….