At seven months Kloe is now bigger than her big sister Kali.  Kali has more girth and more fur which makes her seem even bigger than she is but Kloe is taller and weighs as much – about 60 pounds.  It would be easy to think the she was no longer a puppy being so big and so smart and so independent.

But at the end of the day she is still a puppy.

There was a time when we used a “Pet Corrector”; those air cans that make a loud hissing sound that gets your “pet’s” attention and “corrects” their behavior.  We used it for a time with Kloe to “correct” her behavior of jumping on us (and guests) when she was excited.  It was very effective.  Almost too effective.  When she heard it she would, with tail between legs, come running to my feet,  even if it was me who had the Pet Corrector in my hand, and press her body into my legs as if to say, “save me from that scary and forbidding sound”.

We havn’t used the Pet Corrector for some time.   Partly because it ran out of hiss but mostly because Kloe has matured and though conditioning and training was much better about jumping when she became excited.  Recently however we noticed that when we sneezed Kloe had a similar reaction to our sneezes as to the Pet Corrector.

The picture below is the end result of Holly having sneezed and Kloe running to me as I sat in my recliner and pressing her body against my legs so that I would save her.  As she sat there, tail between her legs, like a snake she began slithering up into my body and I didn’t stop her because, well, it was so darn cute. She ended up in my lap and that was ok with me because, after all, she is still a puppy. 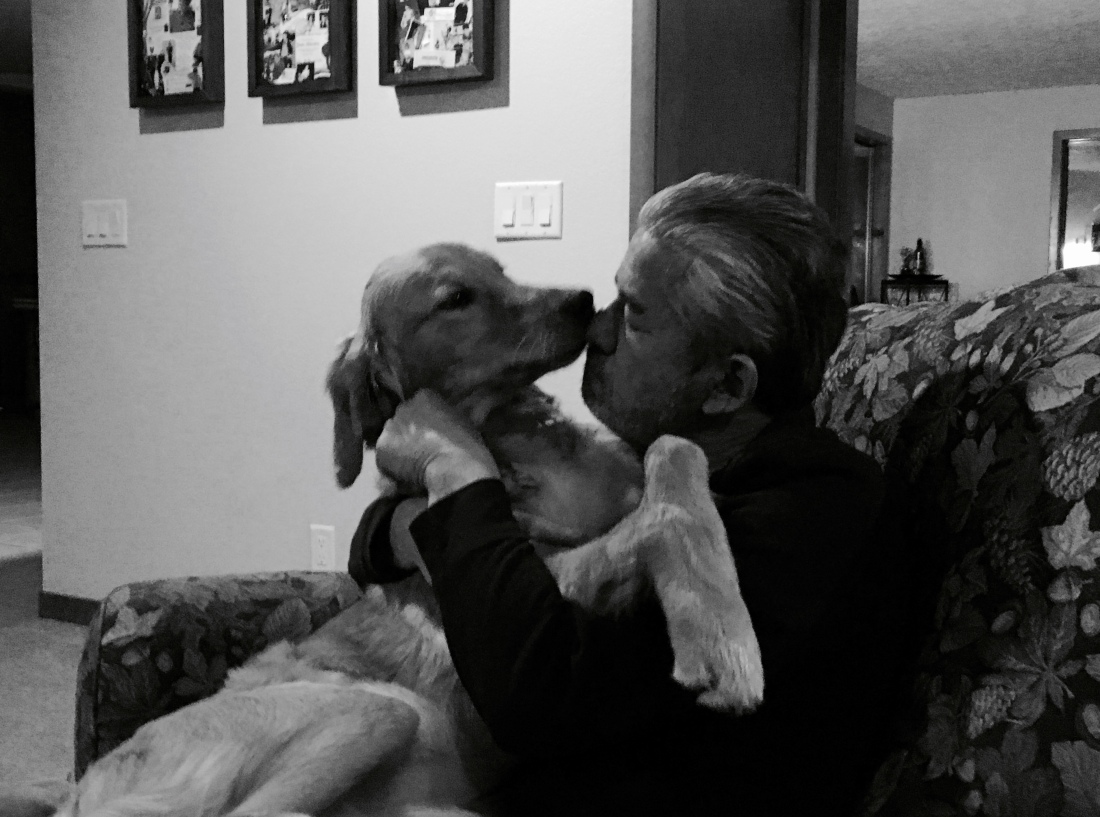 Kloe: “Be my hero dad and save me”.  Me:  I will always be your hero Kloe and I will always there to save you (even if it’s just a sneeze from mom).

I can’t believe how quickly Kloe as grown! And she is so beautiful. I know how hard it is to train a dog not to jump when excited. Our Lucy was a terrible jumper when we first got her, so I worked with her diligently, and she learned: not to jump on me. Everyone else was still fair game. So I’m glad you found something that worked for your dogs!

Hi Ann – what techniques did you use that were effective with Lucy?

Your “pet corrector” may explain a problem I had with Ray in his first year with us! We had a truck go passed us and the high pressure release on its air brakes went off. Ray did a vertical takeoff and was obviously not happy. A few weeks after that, we had a bus pull away from a bus stop very close to us and, again, there was sharp hiss of escaping air under high pressure. Ray was very disturbed by it. He’s fine now but those things do not seem to be a particularly good idea as a training tool. 🙂

Hi Colin. It was actually very effective but obviously had some side effects. We only used the one canister and when it ran out of air we’d only have to have it our hand and Kloe would display the correct behavior. I actually used on the deer a couple of times when I went to put food in their trough and they would not give me enough space 😊

Given the accepted equal of a dog’s mentality to that of a 3 yr old child, I always fall back on “If you wouldn’t do it to a 3 yr old child, perhaps you shouldn’t be doing it to a dog.” As for being effective? Cesar Millan has all sorts of training methods that are effective, but I wouldn’t use any of them on Ray.