From the first day Kali arrived from Taiwan almost two years ago she has always been very respectful of the house, the yard, and our possessions.  She seemed to inherently know what was a toy and what wasn’t.  Even if they looked the same or were the same.

We have a beanie baby that we use to keep our door ajar at night.  It’s an old habit from when Panda the cat was still with us.  It kept the door from shutting all the way when the heater came on (house air flow dynamics) and gave him a way to come and go while we were sleeping.  Full transparency about that: initially it wasn’t so much because we cherished this animal and wanted him to have full access to us even when we were asleep.  It was because, well, he was a cat and he would tear up the carpet outside our bedroom door if we didn’t.  I’ve mentioned before that we’re very trainable, right?

The point about the beanie baby was that Kali has a couple of beanie babies in her toy box that she plays with from time to time.  But she never touches the beanie baby next to our bedroom door.  As I recall she picked it up one time when she first saw it, I said “no – that’s not yours” – she dropped it and it’s never been an issue since.

She has fuzzy toys she likes to chew on and some of them look a lot like socks or slippers but she’s never chewed on a slipper, shoe, or anything else that wasn’t “hers” as appealing as they may be to her.  She instinctively knows what’s hers and what’s not hers and shows proper respect.

Kali is extremely food motivated.  She is “all about the food” which makes it easy to provide positive reinforcement for good behavior and obedience.  So as respectful as she is about “things” what is truly notable is how she respects Smokey’s food. She has never exhibited any food aggression even from the first week she arrived and ate side by side with Smokey.   She knows what food is hers and respects Smokey’s even when it’s left unattended.

Smokey is not so much about the food.  Mealtime for Kali is an event.  Mealtime for Smokey is about the 6th or 7th item on his daily “to-do” list.  For convenience and routine sake I feed both Kali and Smokey at the same time.  Kali never fails to do her Suppertime dance even at breakfast.   The house could literally be on fire with fire fighters spraying water and burning beams falling and Kali would stand her ground and finish her meal before reacting to the mayhem around her.  When Smokey’s bowl is put on the ground I usually have to call him over to it.   I’ll say, “come on, Smoke.  Eat up or Kali will get your food”,  even though I know she won’t.  Smokey will saunter over to the bowl, take a sniff and look around the room (what is he a cat?!), and usually walk away and return to the spot in the sun or couch he was sleeping on.  He’ll eventually go back and eat but it might be a while and long after Kali has finished her puzzle-maze filled bowl.

I used to think that Kali would eat Smokey’s food if left on the ground unattended so I would hang around until they had both finished.  She did try to eat it once and Smokey made it very clear that even though he was not interested in the food at that moment that it was his and Kali should back off, which of course she did.

Here is what I found to be a truly remarkable event.

The other morning I put the food bowls down, Kali’s first.  With the bowl in front of her she immediately goes into a sit with eyes fixed on mine.  It’s our routine and I wait four or five seconds before I say “ok” and point to the food.  I do believe that she would sit with eyes fixed on mine for 10 minutes if I made her.  I would never do that of course but I’m pretty sure she wouldn’t eat until I told her it was ok no matter how long she had to wait.

Smokey’s bowl went down next a few feet away from Kali’s.  Smokey does his routine and eventually walks away from the food without eating.   I head upstairs to my office and see Kali’s eyes glancing back and forth between Smokey’s bowl of food and me.  As I head up I tell Kali to “leave it”.  She walks past the food and lies down in at the edge of the kitchen.  I know Smokey will eventually eat.   I usually check after about 10 minutes and if the food is still there I pick it up and it becomes dinner for him later that evening.

This particular morning I forgot to go back downstairs to check on whether Smokey had eaten.   About 30 minutes had passed.  I head down and I see that Kali is lying in the same spot and Smokey’s bowl is still full.  But Smokey isn’t around.   I then remembered hearing my daughter pass through the kitchen and go back to bed. I realized that Smokey had followed my daughter into her room without eating.

But as I’ve said about Kali, she is all about the food.  For her to lay there for half an hour by herself with a bowl full of food and not eat it was truly remarkable.  I couldn’t have been prouder of her at that moment.  I picked up Smokey’s bowl and opened the cookie jar and handed Kali a couple of biscuits while telling her what a good girl she was.

I only hope she had some idea of why she was being rewarded. 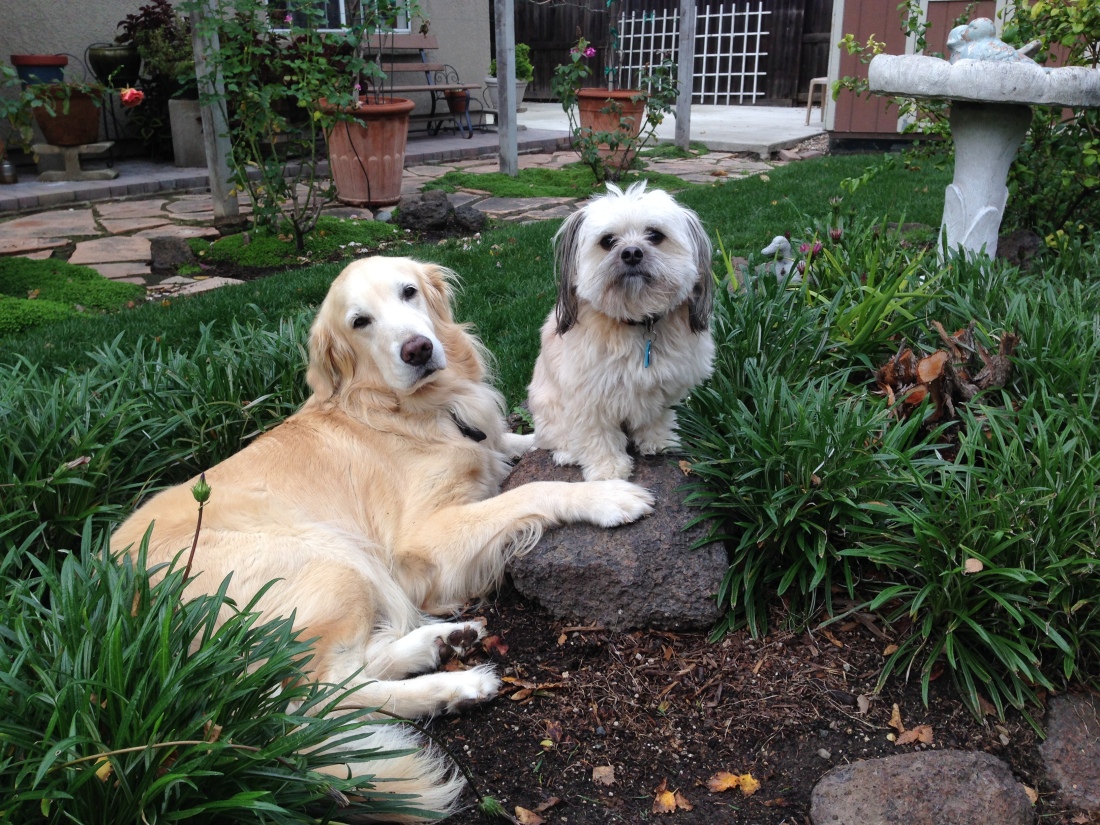 What a good girl! I can’t say that Snickers is the same way with Polly’s food all the time, but at 14 Snickers kind of does what she wants. Most of the time it’s just more annoying than harmful. One tidbit…Snickers has this large stuffed duckling that used to be a prop at a photo studio. Every stuffed thing we gave her before it was a toy, so when we gave her the new “Ducky Man” to use on her bed as a pillow she tried to unstuff it. We only had to tell her once that it was a pillow and not a toy, and she never tried again. She still uses it to this day.

What remarkable behavior indeed! My last rescue would have gobbled that additional bowl up in a nano-second. Sam is a lazy grazer and never bothered the other dogs’ bowls either. He generally leaves food in his bowl every day. 🙂

Kali would never leave even a grain of food in her bowl. She licks and licks the bowl clean – never needs washing. The one thing she does do with Smokey’s bowl is as soon as he is done (because she’s been watching him like a hawk – no make that “watch dog” 🙂 – is go over and lick the bowl for any remnants he may have left. Again, another bowl not requiring washing. It’s a great system…

Hire that dishwasher out! 😉

Wow! That is very impressive that a dog who loves food so much also has such a respect for boundaries. I think that says a lot about her personality, and also the way that you have trained her. Congrats to both of you!

Thanks Ann – we’re a good team and Kali makes it easy to be successful!

She is so good! We have not “tested” Ray in that area, although I suspect that he would fail miserably. Having said that, we have left food on the kitchen counter which was well within his reach, but he hasn’t touched it. One just never knows! 🙂

Leave a Reply to Tails Around the Ranch Cancel reply