The 4th of July has always been one of my favorite holidays.  Not because of any great traditions or specific memories but because its been one of those holidays where I feel ok not doing much and not feeling guilty about it.  As a kid the long July days made it hard to wait for fireworks.  It seemed as though it would never get dark.  I have many fond memories of when our kids were young.  There was the annual neighborhood bike parade where the kids would decorate their bikes in red and blue streamers, flags, and whatever else they could come up with.  Usually a block party took place later in the day and was followed by volleyball and later fireworks.  But more recently, as in the past five years, the 4th has a much more special meaning for me.

Kali arrived from Taiwan on May 24, 2014.   She quickly assimilated into our family as in almost instantly.   The morning after she arrived I began this Golden Kali blog which at the time had the tag line, “Kali’s New Life in America”.  Kali arrived wearing a brown scarf that was put on her at some point before boarding the plane in Taiwan for the trip to America.  After greeting her at the airport, taking care of a few formalities, and letting her get her land legs back we headed home to Livermore.  But before we did one of the rescue group volunteers took off the brown scarf and replaced it with a scarf that had red, white, and blue stars and strips.  It was quite symbolic and a touching gesture that Kali was now an American.

So back to the 4th…   Although Kali arrived on a Memorial Day weekend because of this scarf it’s been the 4th of July that marks another year of her life in America.   Much of Kali’s life, and mine, has been chronicled in this blog over the past five years.  In a 2015 post called Tradition I wrote about how a new tradition began where on the 4th I put that red white and blue scarf on Kali and she wears it for the day.   This scarf for Kali and I stands for her journey from Taiwan to America and her her new chance at a good life in a furever home.  As important, when I hang the scarf around Kali’s neck, I do it as a tribute to all the rescue groups volunteers in both Taiwan and the US who have done so much good for so many Golden Retrievers like Kali.  For them I will always be grateful!

So on this fifth 4th the tradition continues.  This morning I took out the scarf and placed it around Kali’s neck and we went for a brief walk.  She’s twice as old (ten) as she was when she arrived and the tradition of the scarf becomes more meaningful with each year.  She doesn’t want to walk as far, uphill is not her friend, and there are may signs of her slowing and aging.  I don’t like to think about it but there will be a 4th of July when Kali is no longer with me.  Not physically.  But in spirit I know she will never leave my side.  And this scarf, her journey, and her time in America will be with her and I forever.

Happy fifth 4th Kali.  Thank you Rescued Love From Taiwan and True Love Rescue for brining Kali into our lives.

Cheers from The Golden K!

She was an American girl…. – Tom Petty 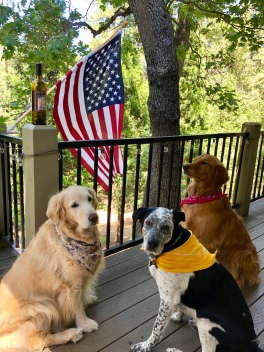 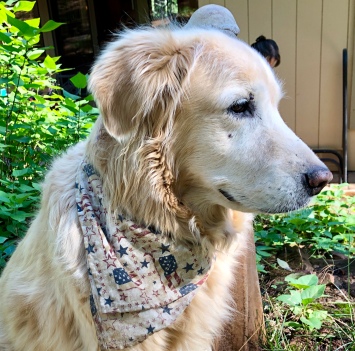 When Kali arrived from Taiwan in 2014 she arrived with a brown scarf.  At the airport one of the volunteers that was assisting with her transition to our care took off the brown scarf and replaced it with a scarf with red, white, and blue markings that represented the American flag.   Kali was now an “American Girl”.

So beginning with that 2014 4th of July it became a tradition for Kali to don that same scarf and take a photo.  A photo that represents our collective patriotism but more importantly our thanks to the Taiwanese care givers who rescued Kali and sent her to America and to me.  Thank you Jade Lo and team.  Kali and I salute you and honor you for your the work you and your team do for so many dogs in need.

Happy Birthday America from Golden Kali at The Golden K

Kali arrived from Taiwan Saturday evening of Memorial Day Weekend, 2014.  At the airport In Taiwan volunteers had put scarfs  with Taiwanese characters on all the dogs as they prepared them for the long plane ride to America.  When I took Kali out of her travel crate she was sporting this handsome looking scarf from Taiwan.   I walked Kali around the parking lot at SFO and once she got her land legs back one of the volunteers took off the scarf from Taiwan and replaced it with a scarf bearing the American stars and stripes  This is the scarf that Kali wore home that night.   That gesture – the switching of the scarves –  served as a great symbol of Kali’s transition from Taiwan to America.  New sights, new smells, new symbols, and new care givers.

I took the scarf off of Kali the next day.  Holly had carried the scarf with the Taiwanese characters home in her purse the night before.  She tied both scarves to Kali’s crate, which by the way she never used because she never really needed it.  The crate was folded up and put in storage a few weeks after Kali arrived once we saw that Kali was able to find our her own safe and special places around the house. She had demonstrated to us very quickly how respectful she could be of the house.

Last year on the morning of the 4th of July I untied the stars and stripes scarf from her folded up crate and put it on Kali to wear for the day.  I did the same thing this year and you can see her regally sporting it in the picture below.

Besides routine I’m also a big fan of tradition.  Years ago I made a mix tape (remember those?) of songs that seemed Americana to me.  Some Country songs, some Rock, some Jazz; an electic mix of songs that reminded me of America for one reason or another.   I play it every fourth of July.  Now, after just two 4th of July holidays with Kali her stars and stripes scarf has quickly become part of my 4th of July tradition.  It made me feel so good to see her wear it last Saturday knowing what it stands for.

And what does it stand for? Yes, perhaps the obvious patriotic things associated with our red, white, and blue stars and stripes.  But with this tradition it stands more for Kali’s journey from Taiwan to America.  It’s gratifying to know there are people whom I’ve never met half way around the world who took Kali in, cared for her, and sent her to me, on a plane, with a scarf. And once she landed other volunteers made the symbolic gesture of changing the scarves out and sending her home with us as an American dog.

Traditions evolve and that mix tape I mentioned is actually now played digitally from my iPhone sent via bluetooth to speakers. Ahh, technology.   But the scarfs are and will remain fabric; both literally and figuratively.  Kali has memories and experiences from Taiwan I’ll never know or appreciate.  They’re as meaningful as the experiences she’s had in America and account for a large part of the fabric that makes her who’s she is.  In fact they’re probably more meaningful. Maybe the memories and instincts gained in Taiwan will fade as the years pass or maybe they’ll forever define who she is.  But make no mistake.  Kali has embraced America and all the blessings and privileges of being American (warts and all; and there are many).

Next year as the 4th of July holiday get’s close I’ll begin thinking about Kali’s scarf and my mix tape.  I’ll make a mental note about how many “4th’s” she’s been with us.  I’ll spruce up the yard for our BBQ and rationalize why it’s better to stay home than fighting the crowds at a community celebration.  I’ll take Kali for a walk sporting her scarf which will elicit smiles and compliments from those we pass along the way.   And at some point during the day I’ll sit with Kali and make a toast and give a nod of acknowledgment and thanks to the dedicated volunteers in Taiwan who made it possible for me to have a very special dog with a very special scarf.