I’m a nicknamer.    I don’t know why but I’ve always given nicknames.  I call my oldest son Pop.  He’s 33 and I started calling him that when he was less than six months old.   It stuck.  There’s variations of the nick name as well like Popadoo, Popadoo-ron-ron, and Popodopolis  My other son I used to call Goosey-Goose’ because he was always bumping into things as a baby and getting goose eggs on his head.  This one did not stick which was probably good.  My daughter is Sweetie Girl, Holly is Hollis Marie, and so on and so on.

So it shouldn’t be surprising that “the girls” (Kali and Kloe) have nicknames.

Kloe: Klois Marie (there’s a theme here), Kloe Bowie, Sweets (which always followed by me saying, “mind if I call you sweets”, and  Klo Klo.

The names are always organic except for one that I now have for Kloe:  Sugar Lips.

Some time ago Holly was teasing me saying that I have all these nick names for the girls.  So I say, “like what”.  And she goes on to name a few and throws in Sugar Lips for Kloe which I had never used before.  I said,  “I don’t call Kloe Sugar Lips….   until now”.

“Hey Sugar Lips” is now my usual response to Kloe when she comes to greet me.   Her lips and kisses are indeed very sweet so long as I don’t think about all the foraging she has been doing around the Golden K but that’s a post for another day.

So yeah, Sugar Lips.   What nick names do you have for your pups?

Sugar Lips Chillin’ on the deck of the Golden K 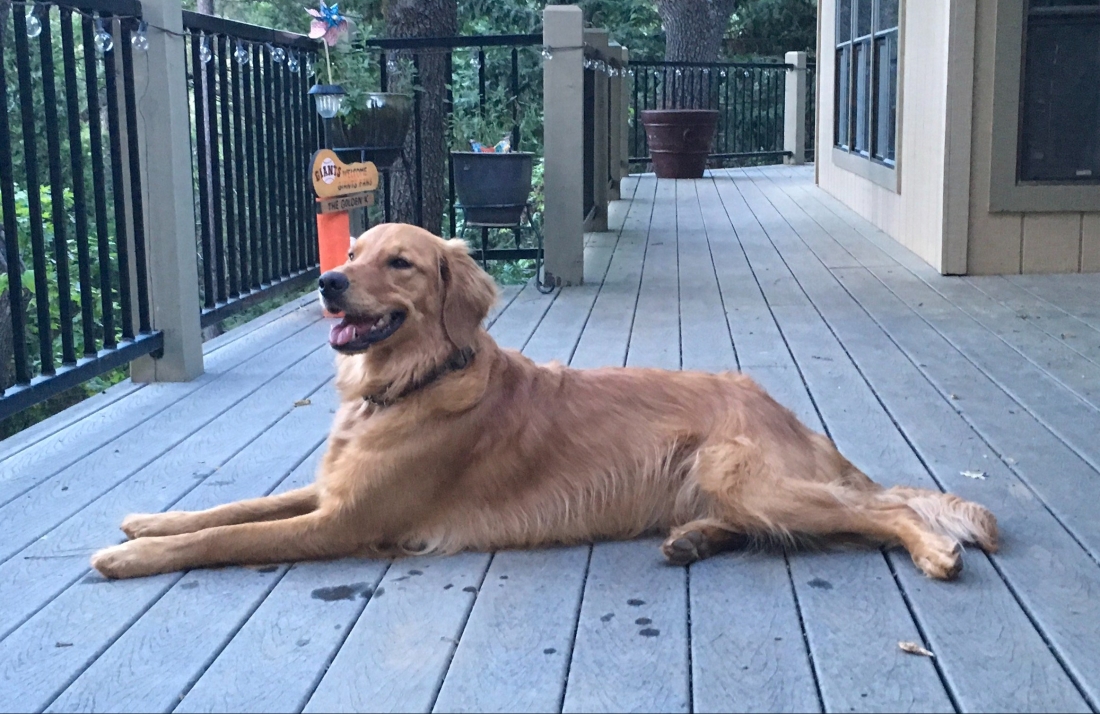 I think Sugar Lips is a great nickname for Kloe! And I do nicknames, too, for both people and animals. I’m not sure why…they just pop out, and sometimes they stick!

Hee, hee. Some of my pet names, particularly for Sam might be a bit too ‘HBO’ for your blog. #OhThatDog
But I have more PG rated nicknames for the fur kids too. Samster, is an obvious one and Buddy. All too often I refer to Elsa as Lady Mae. She reminds me of the indomitably strong character of the same name from Mr. Selfridge. Loved that character! And it so fits her. When we’re all kind of tuckered out on a hot day, they both get treated to ‘Come here, Bug.’ 😍

Would love to hear some of the “saltier” names for Sam 🙃

LOL 😂I think I make the neighbors blush when he goes into knucklehead mode and I let him know in no uncertain HBO terms what a “jerk” he is (pooping invariably where sidewalks go up toward front doors is his favorite trick on our walks). Brat!

It is a strange thing, but as a housesitter, I do use the proper pet name, but also invariably add on the moniker, ‘sweetpea,’ or ‘sweetheart.’ I feel somehow by my very annunciation of these words, it conveys my emotional feeling towards the pets and that feeling is what they understand from the non verbal cues!

Agree totally. The non verbal gestures speak volumes and then the pup will associate that word with your emotions.

I love all of your nicknames and that beautiful photo of Sugar Lips, who may or may not have been foraging before that shot was snapped. We also have tons of nicknames for the girls, and like yours they are completely organic. Harper Lee is also known as Miss Lee, Wee Wee, Weese, and Little Miss Harper Lee. Tallulah’s nicknames are seemingly endless: The Bee, Buzzy Bee, Buzz, Bubba, Bubbs, Bubba Bee, Bee Girl, and on and on. Sometimes Tallulah’s daddy says, “You need to use her real name or she’ll never know who she is. Silly, she’s all of the above!

Sweet names for sweet girls! I bet they know them all in spite of dad’s concern.