“The family that obeys together stays together”.   At least that’s what we say around the Golden K.  OK, we might not actually say that but maybe we’ll start.

Earlier this Spring Kloe participated in an obedience training program conducted by a local group affiliated with the American Kennel Club.  Since the time Kloe was a pup Holly (mostly) and I had been working 1:1 with Kloe using the training skills we learned from a private trainer we hired when Kali first arrived from Taiwan.  We felt Kloe needed more socialization and structure so Holly enrolled her in the program.   I had become sloppy with Kali so I decided to enroll her too so that we could all go through the program as a united pack.  The family that trains together remains together.  Maybe we’ll start using that phrase too…

Both girls flew through the program with flying colors.   Eventually…

When we arrived for the first session our “girls” entered the building with guns-a-blazing!  They announced their arrival with a lot of robust barking.  Kali: “Who are all these dogs and why don’t they run away when I bark at them?” Kloe:  “Who are all these dogs and why won’t you let me off my leash so I can go play with them?”  All the other dogs: “Who are those two loud mouths?”

After a couple of weeks both girls settled in, Kloe realized she was there to work and gave Holly her full attention for most of the 55 minute sessions. Kali was the star pupil.  I wasn’t surprised.  Most of the other dogs were pretty young because this is the class that is intended to follow the Puppy class.  At eight years old Kali was the the Geriatric Granny of the class but I was none the less proud of her. The trainers and other owners watched and smiled as Kali pranced around the room listing to and responding to my every command.  In Kali’s mind a command, regardless of who it is directed at, means a treat is not far away which has made her very trainable.

At the conclusion of the seven week course the trainer told us about an upcoming AKC Good Citizens Certification test that would be available for the members of the class.  This test is comprised of ten behaviors the dog has to demonstrate.  They are relatively basic behaviors such as sit, heel, stay, etc.  They are also tested on distractions, walking through an area crowded with people, and so on.  They must score 10 out of 10 in order to be certified.  AND, there can be no treats used or on the owners body while they are being tested.  Rutt Roh…!!

So last Sunday Kali and drove to Jamestown to take the test.  I was a little apprehensive because Kali still gets a little anxious when new dogs are around.  Kali on the other hand was Kool, Kalm, and Kollected and when it was her turn performed all ten behaviors without issue (and notably with out treats).

Kali will always be my precious Golden Kali with or without any certificates or awards.  On the one hand this test was not a big deal and changes nothing.  On the other hand this test reinforced, at least to me, three years of development anD growth for Kali and I as a team.  So I will mail the paperwork to get the official certificate from the AKC to commemorate Kali’s accomplishment.  It will be framed and proudly hung in a place of distinction at the Golden K.  For me it will mean a lot.  For Kali it may only serve as a reminder of the day she did everything asked of her, on command and as described in the AKC good citizen manual,  without receiving one treat.

This ribbon will have to do until the official certificate arrives.  I wonder where I can buy a golden frame?…. 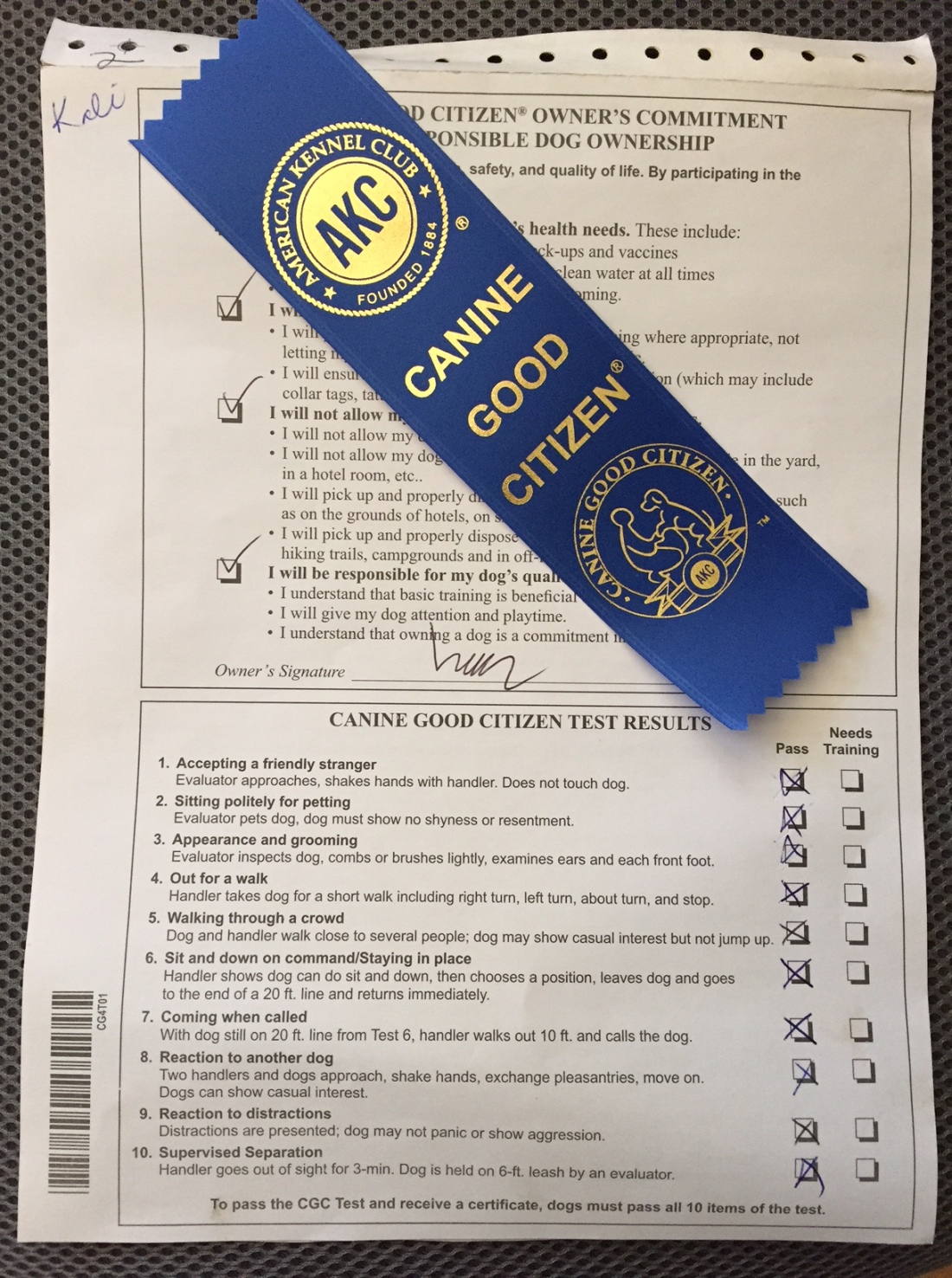 Golden Retriever, Tails From The Trail, The Pack

Big canine-grats on the certification. I learned from Sam that dogs are a lot like lawyers…they are loophole experts. As soon as I relax on some rule…he (and now Elsa) remind me why the rule was created.
P.S. Canine Good Citizen is a plus for therapy work. Just saying. 🙂

Thanks! Yeah Kali began thinking sit and stay amongst other basic commands were mere suggestions. But we are back on track and very crisp. We were thinking of Kloe a therapy dog and still are. But I hadn’t considered Kali because she is such a one man dog (me) and doesn’t show much interest in other people. But she does like kids. What do you think?

Hard to say. Maybe do a test run at a nursing home to gauge? Or see how she handles festivals with lots of people.

Many hospital programs require dogs to be at least 2 yrs old but nursing homes are far more flexible. Good luck!

Good for Kali and Kloe!!! The canine good citizen certification is no small accomplishment. I’m pretty sure its required if you want to use your dog as a therapy dog (we do that at the shelter sometimes). I’m impressed that a dog that came from Taiwan came so far, and it says a lot about you and Holly that she did. Congratulations to you all!!!
Your post did remind me of a dog I had long ago, who actually managed to get “detention” on her first day of obedience school, but that’s another story….

Thx for the encouragement Ann. Kali or Kloe never got close to detention but may have. 😊

Right. I know Ray would have a few issues with those but who knows, he’s grown tremendously since you welcomed him into your family. Dogs have a way of surprising us.

Oh he is continually doing that Michael. 🙂