Well it’s been almost five days and I think I made it.  But I still have about 20 hours to go….

Holly and I went to visit my son and his wife in Chicago for Thanksgiving.  Admittedly it was very stressful for me to think about leaving Kali behind for five days.  We’re fortunate to have a dear friend with two dogs of her own who offered to watch Kali while we were gone.

Our friend Colleen has two very nice dogs of her own: Bucky, a one year old golden lab who is as full of spunk and energy as you would expect.  The other dog is Callie, a Chocolate lab around 11 years and a little slower and full of love.  Bucky and Callie live in a dog house.  By that I mean, like Kali and Smokey, Colleen’s home is all about the dogs with human family members embracing them as family members of the highest status.  They took Kali in with welcome and loving arms and for that I will be forever grateful.

From the regular texts Colleen sent to me it sounds like Kali had a full week of walks, playing in the park with her new fur-cousins, and lots and lots of sleeping in front of the fire place.  In the photo below , not surprisingly, Bucky the youngster of the group wanted no part of sitting sill for the picture in front of the fire place where the dogs’ fluffy beds were laid out.  Kali and Callie had no such problem after a long walk and lots of rolling around and wrestling at the park. 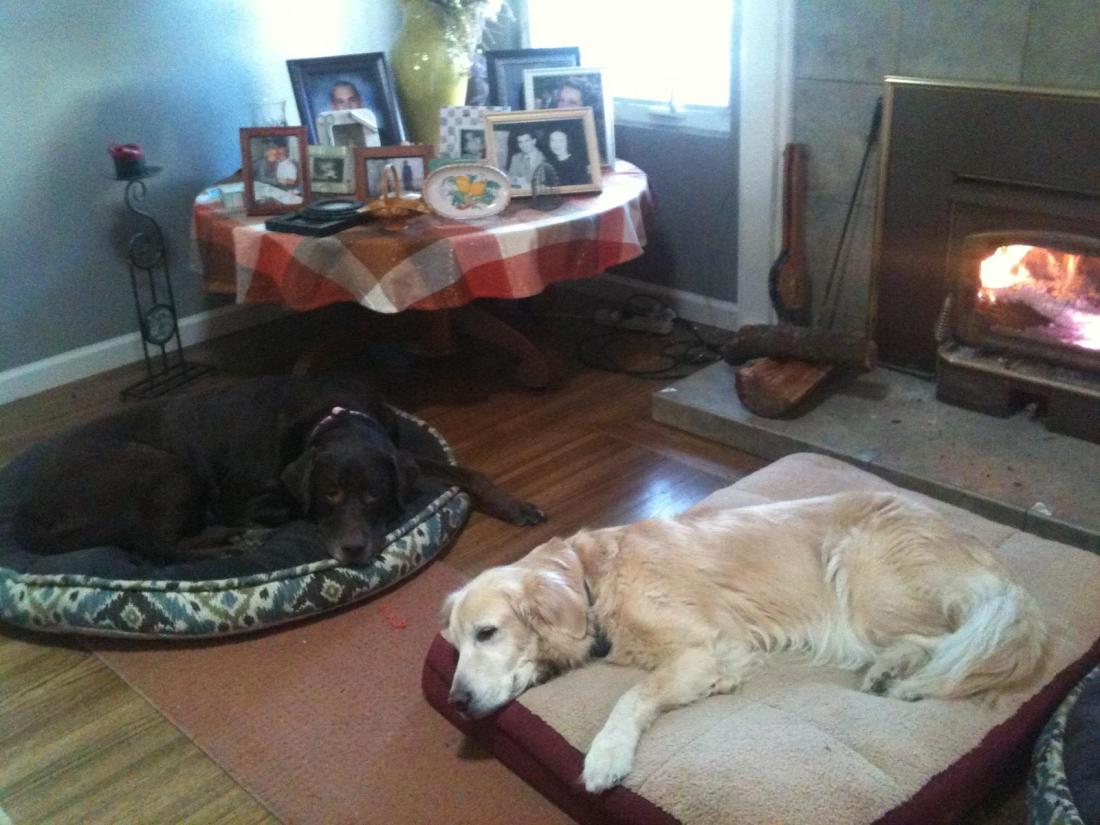 Kali and Callie in front of the fire.  But where’s Bucky?

Kali has never been away from us for this long before so it will be fun to see her reaction (and mine) when we pick her up in the morning.  Meanwhile, I sit at ORD writing this post thinking that tomorrow can’t get here fast enough.

Sleep tight Golden Kali and I’ll see you in the morning.

Golden Retriever, Tails From The Trail, The Pack

Wait, are their names pronounced the same?

Thanks for following Kali N4P… Yes, pronounced the same but spelled differently.

My pleasure! That must be confusing for them and you when they are together! BOL! *ear licks*

Be sure to post the “OMD, you’re baccccckkk” photos! Hope you had a marvelous time away in Chi-town.

Knowing this situation was imminent, I was wondering just how she was coping. Clearly …. she settled in very well. (Sigh of relief)! 🙂

Yes, it appears we both did alright. I’ll know in a few hours when I pick her up. I expect it will be uneventful but a little extra excitement on her part would suit me just fine to know she missed me a little bit…