The neighborhood was all a twitter as the engines rolled in with sirens and hoses.  One after another the engines kept coming and more and more firemen hit the trail.

You know you live in a quiet neighborhood when the biggest event in recent history is five or six fire vehicles pulling onto your street to douse a small fire.  But, it could have been a much larger fire – lord knows the elements are prime for a huge blaze – but our guys took care of business quickly and efficiently.

The trail head to Kali’s creek trail begins at the end of the block.  After over a year of walking the trail almost daily Kali knows the trail like the back of her paw.  Pretty much the same sights, same smells, and same neighbors out for strolls with the dogs, a bike ride or a jog.  Hit the trail head, stop for a quick poop (Kali not me), wrap around the golf course, bark -if antagonized – at a couple yap-yap dogs through a fence in a trailside home, on to the duck pond, a quick jaunt past the dog park (past being the operative term here since Kali is not ready to go in yet), and then we head home.  It’s our routine.

So it was of some personal interest to Kali and I when we heard the fire engines and saw that they were converging at the trail head from both sides of the creek to address a fire that had started in the brush.  One of the fire fighters told me that the fire had been started by someone throwing a flare into the creek.  I hate to assume it was kids who did it but boredom in suburbia after two months of summer vacation is the likely circumstance for someone to “see what would happen”.

We’re in the middle of a mini-heat wave and the temps were in the low 100’s yesterday and will remain so for another couple of days.  So on top of an already drought-ridden landscape the high temps and moderate winds make anywhere in this area prime for a major fire with little effort on mother nature’s part of any one stupid enough to throw a burning cigarette – of flare – into a wooded area. Fortunately, the fire was put out quickly with minimal impact to the creek and no harm to any of the surrounding homes.

I’ve always been fascinated with fire fighting.  When I was five years old I told my mother I wanted to be a fireman.  To this day I wish I had gone into that line of work and don’t have a reason or excuse for why I didn’t.  When I see news stories about fires this time of year, homes in danger, and acres and acres ablaze I feel compelled to drive to the area to see what I can do to help.  “Give me a shovel. Here, I’ll help move that hose….. “.  “Stay out of the way old man.  If you wanted to be a fire fighter you should have done so years ago when you were in your prime!”.  Sigh….  “OK, I’ll just watch from here but let me know if you need anything.  I’ve got a real cool dog – you want to meet her later? Maybe she could ride in the engine next to you.” 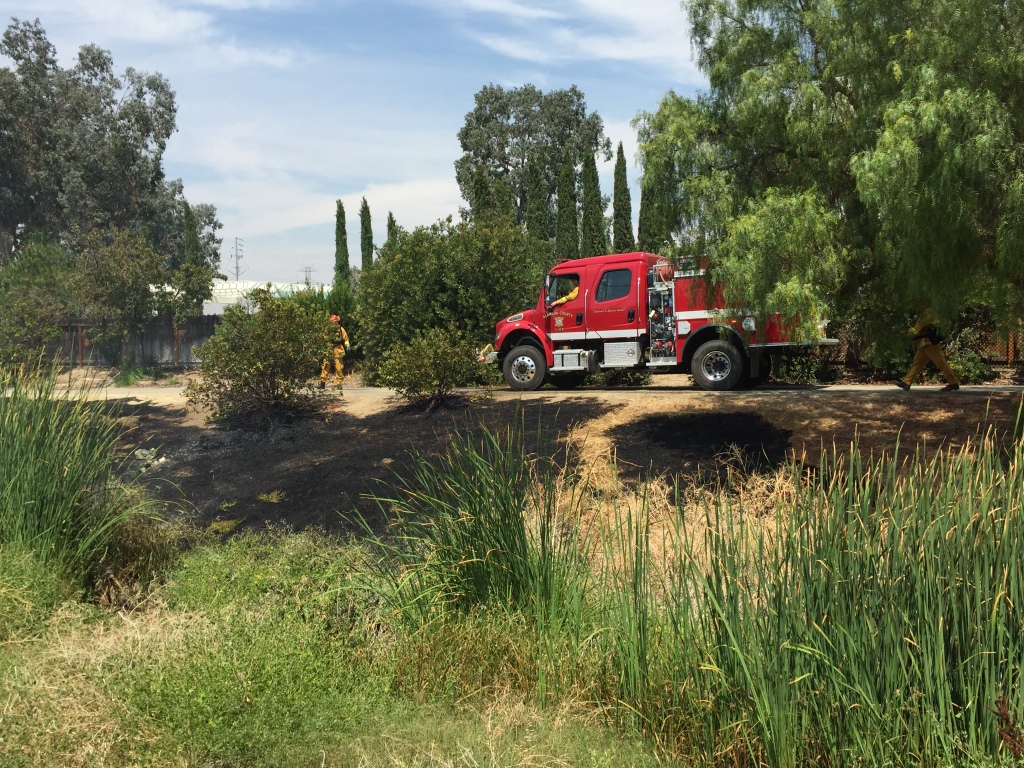 “Let’s roll boys! We’ve got a fire to put out before the game comes on back at the fire house….”

I guess this is one way to get the water level back up in the creek….

All is well again at the creek

I have few if any regrets in my life but not being a fire fighter may be one.  And if I had been I guess I’d be adopting Dalmatians instead of Golden Retrievers, right?  NOT!  I can guarantee you that If I was a fire fighter my Golden Kali would be riding and smiling along side of me in Engine No. 7 and helping to keep her community safe.

Tails From The Trail

You know, I’d pay money to see Ms. Kali riding next to you on a fire truck with her ears flapping in the wind. She’d be the belle of the ball, no doubt. 🙂 Everyone in the western US is stunned by the dryness of California and pray El Nino packs a good wet wallop for you guys this winter.

Kali loves car rides so the fire truck would be even better! And thanks for the positive thoughts about the rain.

We have the same level of stupidity by motorists using the freeway dropping cigarette butts into the long dry grasses, especially during this windy period of the year (we are at almost at the end of a rather dry winter and summer will be a scorcher). Our apartment complex is situated smack in the middle of a dense bush on one side and grasslands up to the borders of the lawn on the hillside. Beautiful picture of the creek – it looks so peaceful.

Thanks for your comment Genis; I think people – myself included – get so caught up in things that sometimes they just don’t think. And yes, our creek is very pretty and Kali and I are blessed to step out our front door and be only a couple hundred feet away. It’s the launching point for all our daily walks. Thanks for follow Kali!

Hi Michael. We have some interesting parallels. I always wanted to be an engine driver (locomotive engineer over here) but was told quite succinctly by my Dad that was not going to happen! Like you, I have few (if any?) regrets, but if I could rewind my life, that is the one area that I would change. Regards. Colin.

Hi Colin – yes I’ve seen other similarities over the past year since I’ve been following you. Good to know there are other [fill in the blank] wanna-be’s out there. Take care.