In a moment of weakness, and just to see what would happen, I patted the top of the bed and said, “Kali- up”.  To my surprise Kali’s eyes and ears perked up and she seem interested.  She took a half step back and then lunged forward placing only her front paws on the bed.  She then made a (feeble) attempt to spring up with her hind quarters and failed miserably.  Kali is not a good jumper…  So in a second moment of weakness I lifted her butt and she was on the bed.  She settled quickly and was – as they say – out like a light.

Kali has a very comfortable bed that sits on ground next to my side of our bed.  Kali loves her bed.  If it is later than 8:00 pm Kali longs for her bed and patiently waits for us to retire up stairs so she can collapse on her comfy cushy bed totally spent from a  long day of naps in the sun and frequent trips to the kitchen to see “whaz up” each time refrigerator door opens.

So there she laid on our bed, she is immediately fast asleep, and Holly say’s, “I’m ok with it; there’s plenty of room on my side.”   She was right.  But my side, not so much.  I have to admit it was pretty cool to have Kali on the bed in between Holly and I.  She was a very good bedmate sleeping quietly with no snoring, no squirming, and no, er how do I say… Free Air Roaming Throughout (FART).  As I settled down to sleep it was reminiscent of when Panda the cat would sleep next to me and I would put my hand on his chest and feel the rumbling of his purring which was calming to me and helped me to fall asleep.  With this in mind I put my hand down to touch Kali but all I got was butt since she was facing the foot of the bed and obviously much larger than Panda.  Still it was nice to have her so near as I drifted off to sleep.

As is my usual pattern I woke up around 2:00 am and got up to drink water.  Kali is sound asleep in pretty much the same position she was at lights out four hours earlier.  But when I returned to bed there seemed to be significantly less foot room down where my legs and feet go.   I felt as though I had been on long flight, got up to use the rest room only to return to my seat and find I’d been downgraded from business class to coach.  But no worries, I suck, it up and hang one leg off the side of the bed and try to get comfortable.  After a few more minutes still awake I push Kali towards the center to make room for my legs.  This helped and we were both back to sleep within moments.

Then around 5:30 am we wake up to heavy breathing.  No, it’s to what you may be thinking (nudge nudge).  It’s our 58 pound Golden Kali panting heavily because she’s hot and probably thirsty from the long flight in business class. We’re (Holly and I) awake now and Holly “invites” Kali down to the ground  Kali looks at the floor and tries to comply but apparently the jump down is too far for her and she hesitates.  Holly ends up picking her up and sets her on the ground and Kali settles down on her own bed.  So it’ all good for about an hour until the heavy breathing begins again – this time right in my face from the side of the bed directly from Kali’s snout.

“Hey Dad”, Kali seems to say.  “Cool sleeping in the bed last night; I really liked it until it got real hot and starting panting.  By the way, your feet were pressing into my ribs most of the night until you got water at 2:00 am. When you got back to bed I sensed some resentment and maybe some regret about asking me onto your bed.  Just saying…”

So Kali and I rise at 6:30, actually later than usual, go down stairs and begin our day: we go outside to pee (Kali not me),  come inside to eat (Kali not me), drink coffee and read the sports section (me not Kali) then – depending on my work schedule – out for our walk.

So my moment of weakliness and whim yielded no harm no foul but from here on out Kali will stay on the ground floor  while Holly and I occupy the mezzanine level.   I think Kali and her sore ribs will be just fine with that. 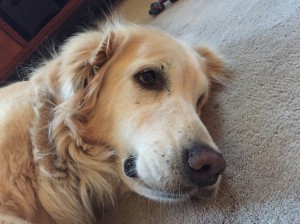 Ha, ha. Good luck with that. Once I made the offer for Sam to sleep on the bed, well as they say…”that’s all she wrote.” He knows the rule about not getting on any furniture unless invited but he manages those invites by being as annoying as possible so the real bed inhabitants can go back to sleep without the clicking nails moving back and forth on hardwoods, the excessive panting or whining. Sometimes they dogs are to smart for their own good! 🙂

Well the post script is that the next night Holly invited her back and during the night shifted and squeezed Holly to about a 1 foot strip of mattress on he side. So that was that! The following night Kali was reluctant to get into her own bed and sniffed all around the top of our bed with glances back and forth to us. She eventually retired to her own comfy mat. Since she can’t jump it probably won’t be a problem but it has been very cute.

Ray jumps up onto beds effortlessly however, he has bad (really bad) startle response so we cannot allow him near us when we are asleep. One little leg stretch, muscle cramp, or even a roll over could result in a large and deep wound inflicted. You are so lucky to be able to consider sharing your bed with Kali!

It was an interesting “experiment” to say the least. Could you consider Ray sleeping in the same room on his mat or is that still problematic?

That would still be a problem because he moves around a lot and you just never know where you are going to find him. He may even decide to get onto the bed!