It’s a magical container that sits prominently on the kitchen counter.  It’s easily accessible and routinely refilled with treasures.  They know it’s there, the see it there, and they come running at the slightest hint that the container has been opened.

This magical container is of course the “Cookie Jar”.

Kali and Smokey’s cookie jar is filled with biscuits which are passed out often for following the rules, exhibiting the requested or expected behavior, and sometimes just because love is in the air.   And with two dogs in the house there are many times that one them will be the beneficiary of just being at the right place at the right time.

For example, I reward Kali for staying out of the kitchen when I’m preparing food.  I tell her “out” and she goes off to a common area between the kitchen and family room and lies down.  After she’s been on the mat for a while I go to the Cookie Jar and get a biscuit to give her to reinforce the good behavior.  The Cookie Jar makes a  clinking sound when the top is removed and the biscuits themselves make a certain sound as the hand reaches in to grab one.  At the faintest “clink” of the jar Smokey will come running from another part of the house into the kitchen and sit next to Kali and stare up at me.  Smokey is thinking, “Cookie time and I get rewarded for being in the right place at the right time”.  And they both get cookies.

When Smokey gets into a scrap on the fence line in the back yard with the neighbor’s dog we call him in.  So long as he comes at the first request we’ll reward him with a biscuit.  Maybe one day he’ll get the urge to bark at the neighbor’s dog and instead come in and go to the Cookie Jar.  Probably not….    If Kali is inside the house when Smokey takes off to the fence line barking she’ll get a little excited, suppress a woof, and move immediately to the Cookie Jar as if to say, “Cookie time, right?  I didn’t bark because I would rather have a cookie and if I am not mistaken I am in the right place at the right time”.  Most of the time she get’s a cookie.  Sometimes just for the fun of seeing her run to the fence and immediately back to me I send her outside to actually earn her cookie and maybe drag her brother into the house.

And then there’s Mommy Cookie Time when Holly come’s home from being out somewhere.  Kali is usually nearby and Smokey is probably perched at the top of the stairs on guard duty (because that’s what he does).  When Holly walks in Kali get’s up and moves quickly to the Cookie Jar.  Almost immediately, you can hear the patter of Smokey’s little feet race down the stairs to join Kali and alternate glances between Holly and the Cookie Jar.  Holly lavishes both of them with multiple biscuits for no other reason than love is in the air. 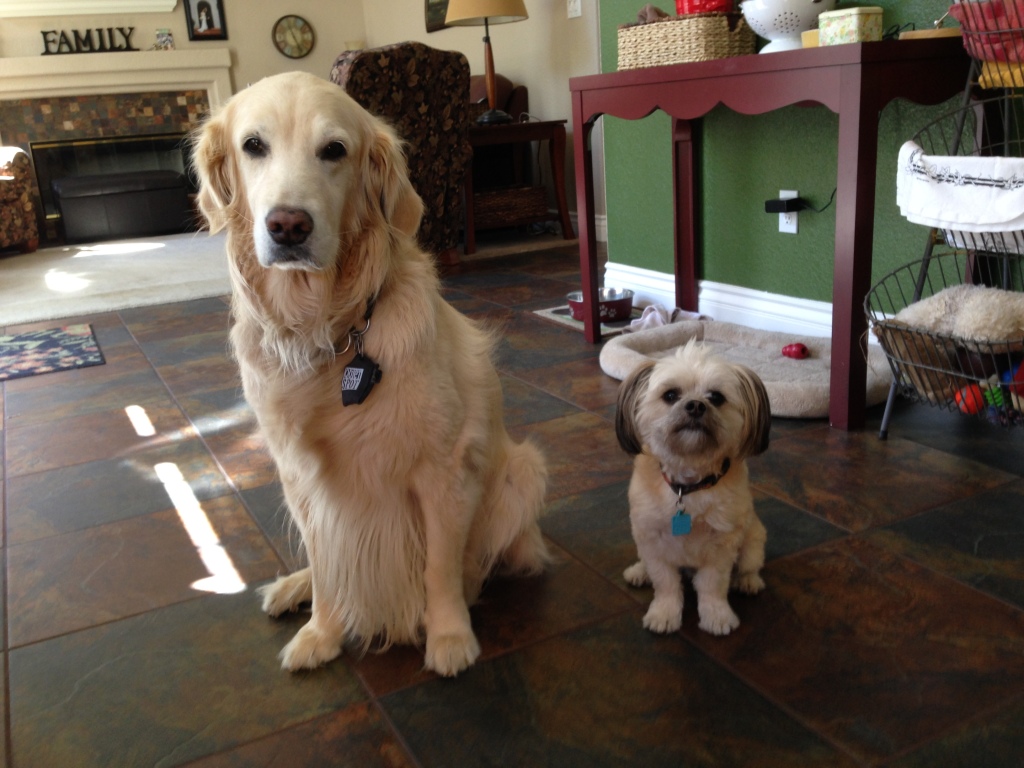 Is love in the air? Because we are pretty much in the right place at the right time!

Yes love.  As in they love being in the right place at the right time.  And love. as in they love it when Holly comes home because of, well you know, the biscuits in “the Cookie Jar”.

And love, as in we love these guys!

I personally think they should both get treats just for meeting adorable – and they are incredibly adorable!! 😄🐾❤️

🙂 Whenever Sam is MIA it means he’s probably getting into something he shouldn’t so I’ll rustle the bag of shredded cheese and he comes flying to get his treat. Work.every.single.time. and I do reward him for coming.