Smokey met Kloe the first time after we moved to the mountains.  Kloe was just a few months old but already four or five times the size of Smokey.  Upon introduction Kloe became instantly enamored with Smokey.  With puppy-pose in full force Kloe invited Smokey to run, play, wrestle and good old fashioned tug-o-war.  Smokey played it cool, gave Kloe a sniff, and sauntered over to some bushes to leave some pee-mail.

Throughout that weekend Kloe would follow Smokey wherever he went.  Kloe would initiate play, Smokey would give her some sniffs and a lick on the face, and then move along his way.  When Smokey would jump on the couch to settle in for a nap Kloe would lay on the floor and stare at him. When Smokey went outside to do his business Kloe would follow in his tracks. Occasionally Smokey grew weary of Kloe’s attention and gave a snarl telling Kloe to back off.  Kloe respected that and gave him his space.  It was good that Smokey, this little miniature Ewok, established some ground rules for Kloe who is always eager and totally unaware of the size difference.

Fast forward a couple of years and things haven’t changed much.  Kloe remains enamored with Smokey who is still just 11 pounds and still holds his own navigating in and around Kloe’s 80 pounds of energy and constant motion.  Upon arriving for a visit the two of them greet one another with enthusiasm, some “kissy face” and both seem to enjoy the familiarity with one another

The Story of a man who had never seen a dog

A man had never seen a dog before arrived at our house a couple of weekends ago when  Smokey was up for a visit   This man thought Kloe and Smokey were two different species.  The man said, “which one is the dog? And if one is a dog what is that other creature?”   When I told him they were both dogs the man responded, “That can’t be true!  One is barely 10 pounds, not much bigger than a squirrel, and looks like a fur ball in the wind. The other is 10 times that size, looks like a pony, and runs swiftly like a  gazelle.  No this can’t be so. They cannot both be dogs.” The man was puzzled and interested in understanding how these two creatures could both be dogs.

I explained how dogs come in many different sizes, have varied physical attributes, and come from many different walks of life.   I told him that dogs have a wide variety of backgrounds, experiences, and qualities.   I explained that although some dogs have been bred for specific purposes like hunting, or herding, or mousing they are all still dogs.  I went on to say that in spite of these different qualities and experiences, and having come from all around the world, they are still all just dogs.  Dogs who recognize each other as dogs.  Not as a different breed.  Not as a lesser or more superior beast. But as equals with a set of universal codes of communication, respect, and an natural ability to get along and co-exist in peace.

The man seemed less puzzled now and began to understand what I was saying.  The man said, “So what you’ve told me is a lesson for dogs?”.

Smokey arriving for a visit

Smokey: “I knew I should have napped on the couch”

Kloe’s head is as big as Smokey

I think it started out as tolerance: “Dad says I have to be nice to this puppy.”   It evolved to tolerance:  “I guess she’s not so bad and is nice to have a a pal at nap time.”  But over time, make no mistake, it turned into love.  A love that as an upright I may never fully understand but in my heart I know it is a love as strong as I have for my closest family members.

18 months ago Kloe was nine weeks old when we brought her home.   From that first day Kali consistently obliged and acquiesced to this little 15 pound whippersnapper as though it was one of her own pups and not just a step sister.   Kloe regularly sought out Kali and found a spot next to Kali that was comfortable for herself even if it was not comfortable for her big sister. 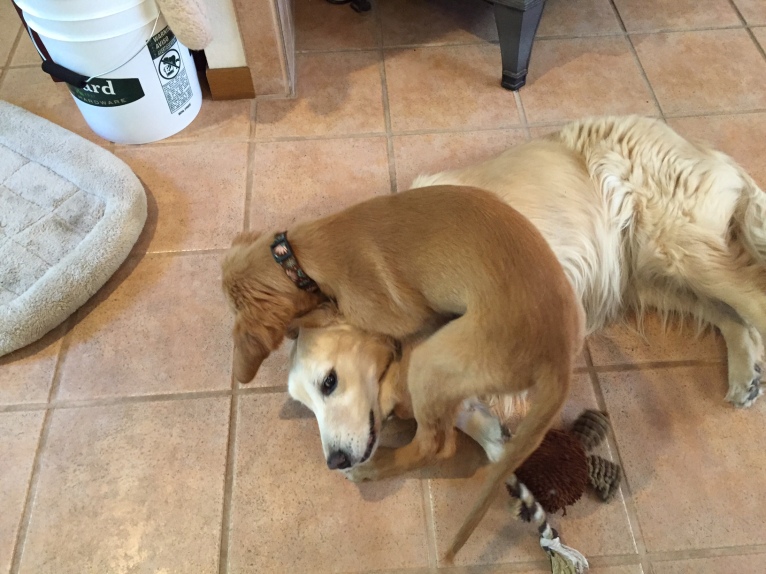 So it’s warming and gratifying to me that although her “little” sister Kloe is now 80 pounds and outweighs Kali by 20 pounds nothing has changed.

So tolerance, indifference, or love?   I know it’s love.

When you’re two dogs living in the same house there are a lot of things you have to share.  You have to share mom and dad, treats, toys, and sometimes the same bed.  I’ve always been very proud of Kali, and especially of Kloe who is still a puppy, for doing very well with sharing without fighting; well sometimes tug of war but mostly with toys are rarely with mom and dad.

One of the things I respect is when our pups have a meal or a special treat like a bully stick.  I don’t take it for granted that they will share it or that I can simply walk over and take it away.  I can take it away and I make a point, again especially with Kloe,  to occasionally pick up her bowl in the middle of a meal and then immediately give it back.  Kloe trusts me and I can’t imagine she would ever become aggressive with me when taking away her bowl or a toy.   But that doesn’t mean I don’t respect that she is an animal with instincts.  Oh yeah and large sharp teeth.

I don’t give the pups bully sticks very often.  Those are usually reserved for special occasions or what I call Rainy Day Recess.  Calling this Rainy Day Recess is an artifact of Holly having taught pre-school for over 20 years.  It’s those days when the dogs can’t outside because it’s raining and they’ve got a lot of energy to burn of with little room to do it in – kind of like pre-schoolers on a rainy day…

So earlier this week when we had some rain I declared Rainy Day Recess and pulled out a couple of bully sticks.  The girls really love this treat and if they had more cognitive thinking skills they would probably wish every day was raining.  I handed them the sticks and Kali and Kloe went to their respective corners of the living room and began chewing.  They looked a lot like I do with a real big piece of beef jerky trying to soften it up and get it into my body as fast as possible.  Because, well because I love beef jerky.

I made a point – a couple of times – to go to each one of them individually and ask them to “leave it” and let me take the bully stick.  They are clearly more reluctant to give up the bully stick than a bowl of regular meal food but they do.  I give it right back to them all the while praising them for “leaving it”.  With a pat and sometimes a kiss on top of their heads I let them know that I approve of them giving up this treasured treat but that I will give it back.  It’s a good relationship, as most good relationships are, built on trust.

So I’m accustomed to the pups not having any food aggression of any sort.  But when it comes to meal time, although they eat next to one another with bowls only inches away, it would only be expected that one or them to get a little testy if the other placed their mouth near her bowl.  Kali and Kloe eat meals at the same time right next to each other.  Although they get different size portions (Kloe gets more because she is still growing) they usually finish up about the same time.  You’d think that Kloe would take longer because she get’s more food but sometimes she finishes fist.  I noticed this the other night and I was a little surprised when I saw Kloe move over to Kali’s bowl while Kali was still eating.  There had been one incident when Kloe was only nine weeks old and tried to take some food out of Kali’s dish while Kali was eating.  With a low growl and quick nip to Kloe’s ear Kali delivered a message and lesson to Kloe that I thought would last a lifetime.

So on this night when Kloe put her snout into Kali’s dish I thought, “uh-oh” Kali’s not going to like this.  I was waiting for Kali to take an aggressive move and put Kloe in her place.  But no.  Instead she kept eating and allowed Kloe to help finish off the few morsels that remained in her bowl.

Wow!  My Golden Kali set such a great example that transcends pets.  If only we as people could exhibit as much tolerance and sharing as she has this world would have to be a better place.  Right?

So thank you my Golden Kali for teaching me yet another lesson in a series of so many since you rescued me.

This is how they usually start out – side by side.