About 15 years ago I was sitting in my vet’s waiting room in Livermore, CA with our first Golden Retriever, Bailey. Hanging on the wall was a print of a Firefighter with his arms around a Golden Retriever. The picture captivated me in a deeply emotional way. The firefighter is sitting on the ground, eyes closed looking exhausted and traumatized. He wears knee pads, leather gloves, and a helmet with a mounted flashlight. He is positioned in a way that he can cradle his partner, a Golden Retriever, between his legs.  The Golden is wearing an orange vest with an American Flag and the word “Rescue”  inside a white cross. With tired eyes the dog looks equally exhausted and sad as his handler.

What struck me about this print was that within the tired eyes of the golden retriever I also saw compassion.

I stood up and got a closer look at the print and learned it was called “Partners”.  I later learned that the firefighter’s name was Skip Fernandez and the rescue dog’s name was Aspen. The painting depicted a real life scenario where they sat in the rubble of the Murrah Building in Oklahoma City after the infamous bombing in April of 1995.

During each subsequent visit to the vet I would look at the print of Skip Fernandez and Aspen and be drawn further and further into the scene. A couple of years ago began searching for “Partners” to purchase. l found that it had been out of circulation for many years. There were a few copies on eBay that were framed and very expensive. The two I found were located in the MidWest and East Coast. With shipping and insurance I deemed it cost prohibitive.  I was about to give up looking when I found an unframed copy on eBay. I bought it had it framed locally and it now hangs in my office.

The first time I saw the print was many years before my sweet Kloe, now five years old, was born. Years later I now see the same compassion in Kloe’s eyes that I see in Aspen’s eyes. Kloe has lived a blessed life and has never had to sacrifice and serve as Aspen did.  But I beleive that Kloe, with the right training, could have been effective in some type of service. Her desire to please, to communicate, and to serve is strong. But mostly it’s her compassion and her ability to feel what the person next to her is feeling; and to react to those feelings. If it’s joy she shares that joy. And if it’s pain I believe she tries to absorb the pain and  bring relief to the person who is suffering.

I was honored to have known a search and rescue dog named Indie.  Indie, like so many other Golden Retrievers, was diagnosed with cancer.   He continued to serve until the end but recently the pain became evident and his owners recently made the difficult decision to put Indie down and take his pain away. As his owner and handler wrote, “The average dog is a better person than the average person; Indie was never average.”   So this print of Partners now has an even more special meaning for me.   I will always see Kloe in Aspen’s eyes.  But this print will now also serve to remind me of Indie and the many search and rescue dogs and their handlers who make so many sacrifices to help others.

RIP Aspen.  RIP Indie.   Thank you for your service. 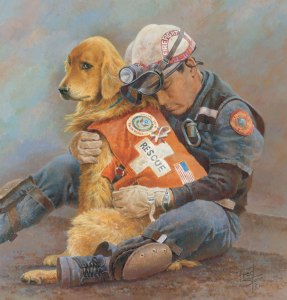 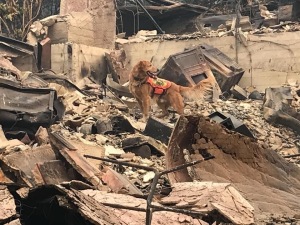 Such a beautiful print! It nearly brought me to tears. In some ways the compassion in Aspen’s eyes reminds me of Radar when he would sense that hubby’s dementia was trying to take control. He would go immediately to hubby’s side and nudge his arm and hand for some head and ear rubs. And the love in Radar’s eyes was so moving. He loved me, but hubby was his special person. Sometimes I feel Bogie is channeling Radar, even at his tender age.

For not having voices and words our pups can be great communicators and companions, sensitive and tuned into our needs and wants. They are also great listeners. I share my deepest thoughts, joys, and fears with my girls and they always give me back what I need! Thx for following Golden Kali.

That’s a very touching print! And I agree that dogs can exhibit compassion, and few dogs show it better than Goldens. Thanks for sharing this post!

What a beautiful print! Your ‘dogged’ efforts have been well rewarded. Both pups seem to possess that totally devoted gaze Goldens are known for. Thanks for sharing❣️

As always, your thoughtful sentiments hit me hard and then settle with a warm, soft feeling on my heart. Love you and your sensitivity 💕🐾

Thank you Dee. These dogs, all dogs, tug on my heart in so many ways.

What a beautiful post! Iike them all but this one is just special. I knew the kind of feeling you were describing and pictures were beautiful. Just a wonderful post. Thank you.

Thank you Carol. My girls and so many other pups have a big influence on my life is so many good ways. Thanks for following Golden Kali!

You are very welcome, but it is truly my pleasure!