Kali:  “OK, post about this nap I’m taking and wake me when there is a biscuit in your hand with my name on it”.

And so it goes with my Golden Kali.  Since the day Kali arrived in America almost three years ago she has been low key and very content to just hang and be with me and observe the world around her.

So this past weekend, after a few days of steady snow, when we took Kali and Kloe for a walk up to the back section of the Golden K I was smiling to see Kali exhibit a little bit of puppy in her.  I’m still very much a kid at heart and it was great to see my Golden Kali, who is just about my contemporary in dog years, act a little bit like a pup as we romped through the snow.

As we got off the path that circles the inner section of the property around the house and began “off roading” to the deeper snow Kali began acting like,  well acting like a dog.  She  romped, she pranced, and she threw herself down on the snow and seemed to make a snow angel, although in reality it was probably something dead she smelled and wanted to roll around on it as she loves to do…

Kali is about eight and I find myself doing the “numbers game” and thinking ahead to the day when Kali will be gone.  I know there are still – God willing – four or five years until that inevitable day arrives.  For Kali, like with my human kids, I would not ask her be something she is not or doesn’t want to be.  She doesn’t have to fetch, she doesn’t have to romp, and if she prefers to nap and just observe this is ok with me because she usually chooses to do these things at my feet, by my side, as a truly loving and devoted companion.

But when she does choose to romp and play, as she did this past weekend in the snow, I will cherish it and be happy for her because I see that she too is very happy to be alive with her pack at the Golden K.

Kali’s Romp In The Snow 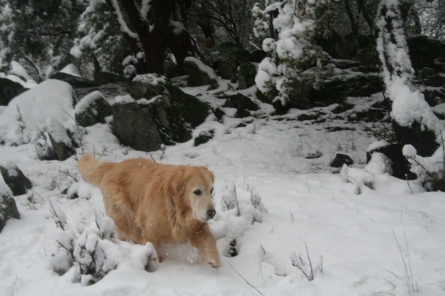 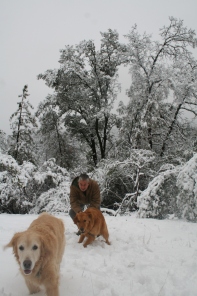 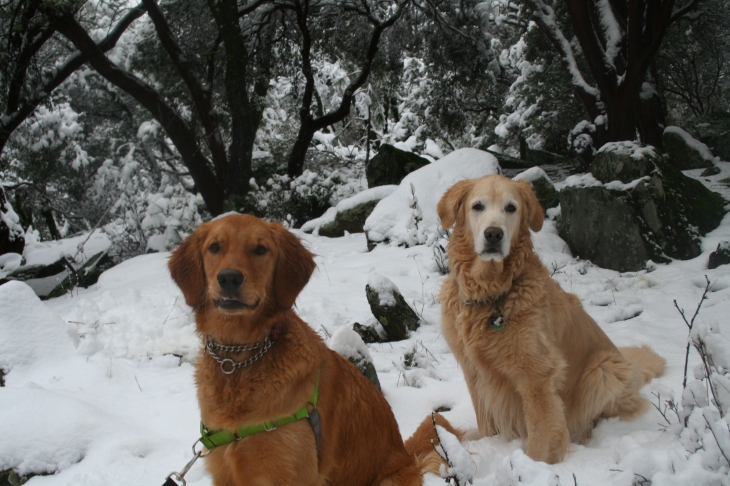 Snow day at the Golden K

Golden Retriever, Tails From The Trail

Kali sounds just like Hanne! At home she just likes to sleep and cuddle 🙂
She really missed the snow the last 2 years (we didn’t get any). But I’m sure she did love the mud we got instead :p

Love these photos! And why is it, every sidle time that I read one of your posts, that I find myself wanting a golden retriever?
,

Ha! Well if you want to go all in on a Golden ( you won’t be sorry!) let me know and i can connect you with a great rescue group.

Hi Michael – I have always been able to relate completely to your Posts. I don’t think that we are much different from each other in perspectives on life, and Ray and Kali certainly share just so many traits. This Post could easily have been about Ray and, yes, I too have contemplated the inevitable (making the grand assumption that he goes before me!). They are very conflicting thoughts because, while the idea of not having him around is quite devastating, I love to watch him when he leaps around like a big goof!
Like you with Kali, I just want Ray to be happy for whatever time he has, and if that involves sleeping for most of the day; or giving me his stunned look when I say “Ray… Fetch!” … than I am fine with that! 🙂

Wonderful! Thank you for sharing those photos and a lovely video. Our pups have only been to the snow a couple times, our youngest Maddie (2) only once and she was really happy prancing around. We hope to go back soon.

Leave a Reply to Tails Around the Ranch Cancel reply