Today Kali and I closed down the backyard. “Closing down the yard” is one of my annual rituals that marks the ending of warm weather and outside living. It’s also marks the preparation for the Holidays and winter. Yes – the harsh Northern California Winter where some days we have to actually put on a coat and wear shoes… what’s up with that?!? 🙂

Closing down the yard is a rather silly ritual and more of a mindset than a physical act. These days the activity consists of packing up patio cushions, throwing covers over the patio furniture, moving small outdoor items into the shed, performing light pruning, and swapping out the Summer BBQ for the Winter BBQ. What? Doesn’t everybody have two?… None-the-less it took Kali and I around three hours all the while taking our time to enjoy the relatively warm fall morning since we didn’t have anything else specific planned for the day.

Since my Bailey Boy died five years ago I’ve performed the ritual alone. So this year it was great to have Kali helping. As usual she supervised and I did the work. I say supervised but really Kali is a bit of a micro-manager. She’s never more than a few feet from where I’m working following me around and cracking the whip. By cracking the whip I mean watching my every move in between short naps of course and an occasional sprint and woof chasing off a squirrel or bird who may distract her worker (me) from doing a good job. Eventually she’ll stop following me around and set up a command center with a global vantage point allowing her to monitor my activities without having to get up as I move from spot to spot. 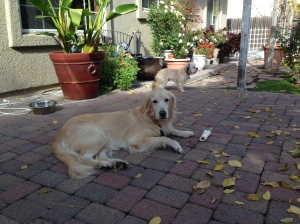 I’m fine with the micro-management. I like having Kali by my side. I’ve become so accustomed to it over the past six months that on the rare occasion that she’s not right there next to me it feels a bit odd and I’ll call her or go looking to see what she’s up to.

The next Fall ritual Kali and I will share is setting up the lighted angel in front of the house while listening to Kenny Loggins’ album called December. This will happen on the day before Thanksgiving. In years past this ritual involved strands and strands of Christmas lights hanging on the house and a variety of lighted lawn decorations to assemble and place around the front yard. There would be ladders, hammers and nails, trips to the hardware store to get replacement strands or bulbs, brandy, and a little swearing. When my kids were small it was important to them that the house had a full complement of lights along every eave and window. I was younger and I liked doing it. When they were away in college they’d come home for the holidays and I wanted the house lit up for them as we drove in from the airport. I liked it a little less but I still did it because it was what they remembered and wanted. But these days there’s just the lighted angel; simple, elegant, and less likely to need multiple trips to the hardware store and little cause for swearing. There will, however, still be brandy.

So this year Kali will supervise the Angel ritual just as she did the closing of the yard ritual. And there will be more after that. The setting up the Christmas tree listening to the Vince Guralidi Trio’s A Charlie Brown Christmas album ritual, the taking down of the tree and lamenting that Summer is light years away ritual, the re-hanging of the SF Giants flag ritual, and, wait for it…… The opening of the backyard ritual.

And for all these things and a blessed life I am so very thankful that Kali will be by my side supervising my every move.