For all our warts I would not want to live anywhere other than this great country of ours, the US of America.

Ray Charles singing “America” in the background, Oaks and Pines swaying to the warm gentle wind, and Baseball coming on shortly.   We are truly blessed at the Golden K.

Whether you stand, sit, or lie down for the flag Kloe, Kali, and cousin Ben wish you the best of bests on this Fourth Of July, Two Thousand and Eighteen. 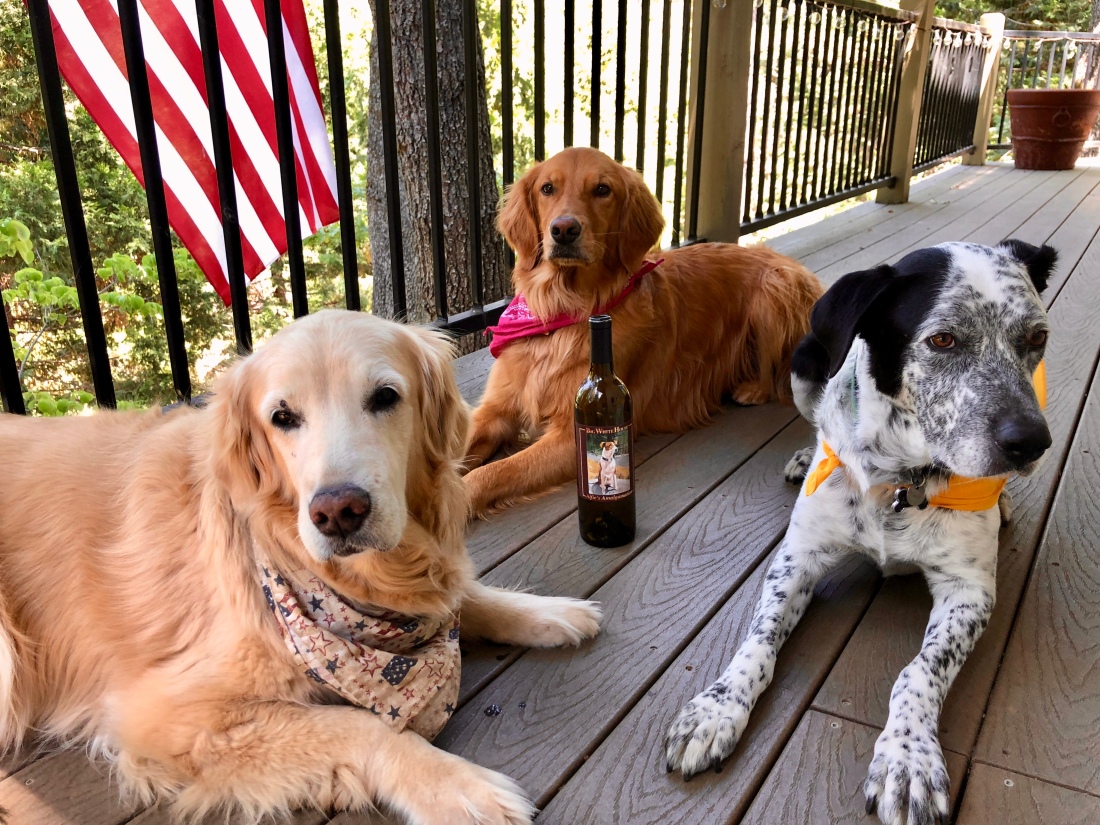 This post I thought was worth reposting here on Golden Kali.  We can say we’ll never forget that terrible day and the events that ensued on 9/11 but time has a way of diluting our experience and emotions.  Let’s never forget the  efforts by our canine heroes.

Kali arrived from Taiwan Saturday evening of Memorial Day Weekend, 2014.  At the airport In Taiwan volunteers had put scarfs  with Taiwanese characters on all the dogs as they prepared them for the long plane ride to America.  When I took Kali out of her travel crate she was sporting this handsome looking scarf from Taiwan.   I walked Kali around the parking lot at SFO and once she got her land legs back one of the volunteers took off the scarf from Taiwan and replaced it with a scarf bearing the American stars and stripes  This is the scarf that Kali wore home that night.   That gesture – the switching of the scarves –  served as a great symbol of Kali’s transition from Taiwan to America.  New sights, new smells, new symbols, and new care givers.

I took the scarf off of Kali the next day.  Holly had carried the scarf with the Taiwanese characters home in her purse the night before.  She tied both scarves to Kali’s crate, which by the way she never used because she never really needed it.  The crate was folded up and put in storage a few weeks after Kali arrived once we saw that Kali was able to find our her own safe and special places around the house. She had demonstrated to us very quickly how respectful she could be of the house.

Last year on the morning of the 4th of July I untied the stars and stripes scarf from her folded up crate and put it on Kali to wear for the day.  I did the same thing this year and you can see her regally sporting it in the picture below.

Besides routine I’m also a big fan of tradition.  Years ago I made a mix tape (remember those?) of songs that seemed Americana to me.  Some Country songs, some Rock, some Jazz; an electic mix of songs that reminded me of America for one reason or another.   I play it every fourth of July.  Now, after just two 4th of July holidays with Kali her stars and stripes scarf has quickly become part of my 4th of July tradition.  It made me feel so good to see her wear it last Saturday knowing what it stands for.

And what does it stand for? Yes, perhaps the obvious patriotic things associated with our red, white, and blue stars and stripes.  But with this tradition it stands more for Kali’s journey from Taiwan to America.  It’s gratifying to know there are people whom I’ve never met half way around the world who took Kali in, cared for her, and sent her to me, on a plane, with a scarf. And once she landed other volunteers made the symbolic gesture of changing the scarves out and sending her home with us as an American dog.

Traditions evolve and that mix tape I mentioned is actually now played digitally from my iPhone sent via bluetooth to speakers. Ahh, technology.   But the scarfs are and will remain fabric; both literally and figuratively.  Kali has memories and experiences from Taiwan I’ll never know or appreciate.  They’re as meaningful as the experiences she’s had in America and account for a large part of the fabric that makes her who’s she is.  In fact they’re probably more meaningful. Maybe the memories and instincts gained in Taiwan will fade as the years pass or maybe they’ll forever define who she is.  But make no mistake.  Kali has embraced America and all the blessings and privileges of being American (warts and all; and there are many).

Next year as the 4th of July holiday get’s close I’ll begin thinking about Kali’s scarf and my mix tape.  I’ll make a mental note about how many “4th’s” she’s been with us.  I’ll spruce up the yard for our BBQ and rationalize why it’s better to stay home than fighting the crowds at a community celebration.  I’ll take Kali for a walk sporting her scarf which will elicit smiles and compliments from those we pass along the way.   And at some point during the day I’ll sit with Kali and make a toast and give a nod of acknowledgment and thanks to the dedicated volunteers in Taiwan who made it possible for me to have a very special dog with a very special scarf.