For two and a half years Kloe was the “baby”.   The youngest of two pups in the house.  As  she grew from 16 to 80 pounds she remained the baby in the overall pecking order of the pack.  Kali welcomed and embraced Kloe from the start and played a big role in Kloe’s successful assimilation into the pack.  Kloe looked up to her big sister and would run to her when scared, cuddle with her when sleepy or cold, and was always subservient to her Kali, although Kali only showed love and never any attempt to dominate or control Kloe.

Golden’s Retriever’s are a breed that retain a puppy-like personality for a long time.  Many never totally lose the playful and whimsical demeanor that puppies exhibit.     With the recent arrival of the new “baby” Koda it’s been interesting to watch Kloe quickly evolve into a more senior member of the pack.  An adult member of the pack.  In fact Kloe has become the protector of the Golden K Pack.

Besides there being a puppy in the house there is another dynamic that is contributing to this emerging maturity in Kloe.   Kali, once very vibrant and alert, is aging.   At nine and a half she sleeps most of the day and has lost some of her vibrance.  The sparkle in her eyes is fading. She walks slower often needing to be coaxed along the way when out for our short excursions.

Although there has never been an true four-legged alpha in our pack if there was one Kloe would be it.   Kali is old and slowing.  Koda is young and immature. At 80 pounds Kloe is large for a Female Golden retriever.  She is bigger, stronger, faster, more alert, and has keener senses than Kali and Koda.  It seems to me that she instinctively realizes this especially now within the context of living with a smaller puppy and a weaker senior. This is not to say that Kloe does, or has any interest in, physically dominating either of her sisters. Although she does seem to take some pleasure of throwing Koda down on the ground or wrapping her entire jaw around Koda’s head when Koda doesn’t get “the message” that enough is enough…  But that’s another subject and post about “Kloe the Teacher” for another day.

So now Kloe is the protector.   Where Kali once took the lead in calling out perceived danger or intruders Kloe takes the lead.   I see Kloe alert and viggilent at times outside while her sisters sleep in the sun.  If there’s a need to sound the alarm she does so and leads the charge running while her muscles ripple through her body like a thoroughbred horse.  Kali hangs back offering high pitched barks of encouragement and Koda bounces along side of Kloe trying keep up not really knowing what’s happening or where they’re going.

Maybe it’s just me projecting but in Kloe I see a more mature and wiser dog.  Kloe will always have a fun and spirited side to her.  She will always go to Kloeville; that figurative place when she lies on her back and stares up at nothing in particular.  She will always throw her shoulder on the ground and wriggle her way between my legs with her butt up in the air and then roll on her back and push off with her legs doing her version of the doggie-back-stroke.  But there has been a change.

It seems to me that Kloe now realizes that her stature in the pack is different.  She realizes that there are two weaker members of the pack that make her stand out physically and in some ways mentally.  Kloe relates to Holly and I in different ways now that Koda is here.  If Kloe observes Koda doing something that is not allowed Kloe looks to Holly or I to correct her.  As much as Koda tries to engage Kali in play Kali has no interest in rough housing with her and if engaged tries to get out of the fray.  Recently I watched that dynamic unfold when Kali became annoyed after Koda ran to her and jumped on her head trying to play.  Kloe came running over put herself between Koda and Kali and wrapped her jaw around Koda’s leg to move her way from Kali as if to say, “leave it”.

In some ways it’s sad to see my “little” baby Kloe grow up into adult hood.  But it’s also warming and makes me proud to watch that 16 pound nine-week old pup we brought home two and a half years ago mature into a fine young lady.  And  lately I’m sure I see something different in Kloe’s eyes. I see less wonderment of the world around her and more of a familiarity with that world and her role in it as a leader of our pack.

Kloe: #2 The reason for the rules 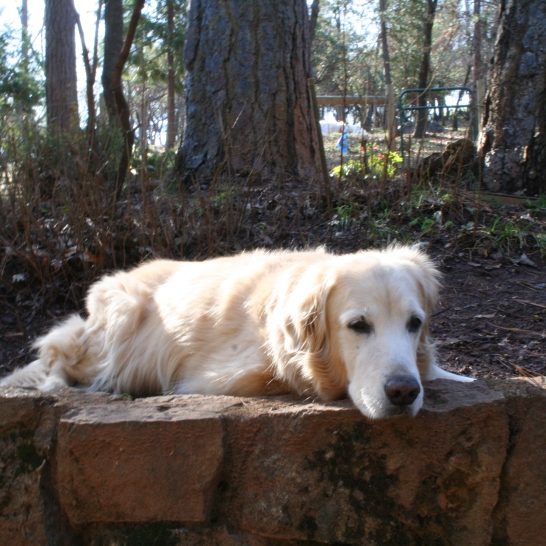 I urged the original poster who was looking for advice to ignore the wrestle-mania advice of this so called and self-professed professional wrestler trainer.   Within moments another comment  from wrestle-mania central was directed at me telling me that I knew nothing about dog training and that the method they described was decades old and highly effective.