After Koda joined our pack a couple of years ago someone asked me why I had three dogs.   I said, “because my wife won’t let me have four”.  Boom – Rim shot!  I wasn’t the one who thought of that answer. I had seen it somewhere else; maybe on a tee-shirt or a Facebook meme.   But I am pretty sure that if I seriously suggested getting a fourth pup my wife would present me with an ultimatum.  That’s not to say that Holly doesn’t love our three girls as much as I do or that I want another dog.   I’ve also had the question about what it’s like to have more than one dog, or as in my case, three.

Having more than one dog definitely has it’s merits: An obvious one is that they provide companionship and security to each other when Holly and I aren’t around.   More selfishly is how great I feel when my three girls are nearby and laying together fast asleep with parts of each other’s bodies on one another.  Ahhh…peace.

But there are plenty things that could be considered downsides:   Three times the cost of food, vet bills, pet insurance, and toys.   And the exponential affect of poop. Or as I say, poop squared.  I’m convinced that having three dogs yields enough poop for nine dogs!

Getting On The The Same Page

Like with human siblings there are times that my three girls are not barking off the same woof sheet.  Koda is maturing and more often she will acquiesce to the flow of the family, wait her turn, or just give me some space with one of her sisters.  But for much of her first two years she demanded the attention of the entire pack during all waking hours.   She commandeered rough play from her two older sisters – Koda and Kali – throughout much of the day. Whether they wanted to play or not.

When Kali joined the pack at five years old it was just her.  Most of my routines revolved around her.   Our walks to the Creek Trail, play time, cuddle time and so on. I have to admit I miss the times that it was just Kali and I.  We established an ever lasting bond that has transcended the passing of time and addition of siblings.   But now at 11 years, Kali has slowed down significantly and mostly sleeps the day away.  Often there are activities when she has to be left behind.  Like morning walks or an excursion beyond The Golden K like a trip to the lake.  That makes me a little sad.

Food Is The common Denominator

Regardless of age, distractions, or personalities there is one activity where The Girls are in lock step.  Meal time!  When breakfast and dinner preparation begin they work in harmony to supervise and root me on.  As I lift the filled bowls from the counter they move as a single unit to the designated feeding area.  Their moves are so aligned and focused you’d think that Bob Fosse had choreographed it!  Once bowls are on the ground they sit without prompting, collectively stare impatiently while waiting for the release to their bowls.  Teamwork at it’s finest!

And then there were three

My Girls have distinct personalities and priorities.  They were never as evident as one day shortly after Koda joined the pack as a four month old puppy.   For potty training and other reasons we used gates to make sure Koda stayed in the kitchen and could not wonder too far out of our site.   One afternoon The Girls were all in the kitchen as I was busy going in and out for various reasons.  To get out of and back into the kitchen I would need to step over one of the gates.  As went to step over the gate my shoe got stuck at the top and I fell taking the gate down with me.  My knee landed hard on the gate and I laid there sightly crumbled on the ground.   Here is where the The Girl’s priorities were on full display.

It all happened quickly.  As I laid on the ground in a bit of pain The Girls all rushed to my side.  But for different reasons.

Koda was first and in a flash threw her body on mine.  Her tail was wagging fast, her tongue was out, and she was very excited to see me on the floor.   Surely this was play time!  Kloe is very sensitive and intuitive.  She knew immediately that I was in pain and came to my side to comfort me.  As I lay there trying to fight Koda off,  Kloe sat by my side leaning into my body with a concerned look on her face.  And then there was Kali; last to arrive but no less passionate (about her priority).   Most dogs – especially Goldens – are food motivated.  If there are levels of food motivation from one to 10 Kali would be at least 500.  These days she struggles to get up from a down position because of her bad hips.   Often times I have to help her up.  But if there is food involved Kali springs up like Tigger of Winnie The Pooh fame and is first in line.

So on this day as I lay there on the ground with the full weight of Kloe’s 75 pounds leaning into me and Koda’s paws and tongue in my face, here comes Kali.   And what does Kali do?  She sticks sticks her snout into my pocket because she knows that there are usually treats there.

So why do I have three dogs?  Because my wife says I can’t have four! 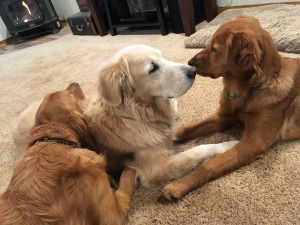 Golden retrievers are our healing therapy!

Hi Jadi. Thanks for sniffing around the Golden Kali blog. 🙂

The photos of them are so sweet, and speak to exactly why you have three dogs.

What a sweet precious post. Love the response to why do you have 3 dogs. As someone experienced at having 1, 2 and 3 dogs at the same time, I know they manage to fill our hearts and souls with their presence and love. In their own special way. 🥰

Now I am convinced that the stories about dogs rescuing humans are limited to trained rescue dogs! Last year (perhaps 2 years ago now!), I somehow missed our top step at our rear entrance, and found myself laying on the concrete slabs at the bottom. My first instinct (because I did not remember the fall) was to do an inventory of arms and legs to check that everything works. The legs failed the test as they did not seem to want to cooperate. I managed to use my arms to twist around such that I could pull myself back up the steps and get to a phone. Once I started moving, the feeling came back into my legs and I cautiously got my self upright again.
What was Ray doing all this time? He was sitting on the top step watching me. He didn’t even come down to see if I was okay. Of course he knew I had no treats on me! Gotta love the guy, but clearly I cannot rely him in an emergency! 🙂

Yup, It’s why none of my girls are named Lassie. 😉

Comfort, luxury and love… I had two labs who have now passed. They were the best. Best companions too. Until we rescued a kitty and now we have four kitties, excluding the visiting ones or those in the office car park. Its a good life. 🙀🐶

Labs are a lot like Golden’s. Glad you and yiu feline friends have each other. And thanks for Sniffing around Kali’s blog.