We were at my older son Jonathan’s end of the year soccer party.  He was seven at the time and his younger brother Michael was four.  The party was at a pizza parlor with the usual array of video games peppered throughout the building.  Like most kids my boys loved video games and they would spend hours and hours (and a lot of money) playing them if we had allowed them to.  My younger son Michael was especially “passionate” about video games and could become laser locked on any given game especially if he was about to beat a “level” or the “boss”.

The soccer team and their siblings were given a small bag with eight quarters to play video games before the pizza came out and before awards were presented.  My boys quickly consumed the eight quarters and then I gave them another eight quarters each.  The end of the year party goes on and most of the kids have had enough video games and are ready for pizza.  But then there’s Michael standing in the middle of the dinning room looking quite forlorn.  Looking at no one directly he says in a most exasperated voice, “If I only had another quarter”.  All at once about ten dads reach in their pockets and offer their quarters to Michael.

So fast forward about 25 years and now this is Kali. Standing in the middle of the room saying, “If only I had another biscuit.”

Today was not much different from most days for Kali.  Get up, eat breakfast.  Go for a walk, get training treats.  Come home watch dad make his breakfast and for staying out of the kitchen, get biscuits.  Later on watch dad make his lunch and get biscuits for staying out of the kitchen again.  Later in the afternoon get a Kong filled with carrots and peanut butter just ’cause.  I think even my son Michael, at four years old as he was in that pizza parlor,  would have to agree that this is a lot of (figurative) quarters.

But there Kali is with her big brown eyes and her oh-so-optimistic outlook.  If dad’s got food there is a chance I’ll get some.  If dad has quarters in his pocket there’s a chance for one more video game.

And Kali, like Michael, is right.  There’s always another quarter. All you’ve got to have is a little moxie to ask for it, indirectly or otherwise.   I love Kali like I love my kids. But as a parent there had to be some limits.  And for Kali there needs to be limits too, right?  Michael’s sad eyes staring longingly over at the giant Atari game.  Kali’s beautiful brown eyes staring at my snack.  Arghh!…  Stay strong.  Be mature,  Be the voice of reason and discipline.  Don’t lie.  Be honest and say “yes, I do have another quarter but it is not in your best interest if I give it to you”.

Kali with her sweet brown piercing eyes and  thought bubble over her head with a small picture of my son Michael next to it, “If I only had another biscuit”.

Me with a thought bubble over my head “Kali and Michael have been spending WAY too much time together”. 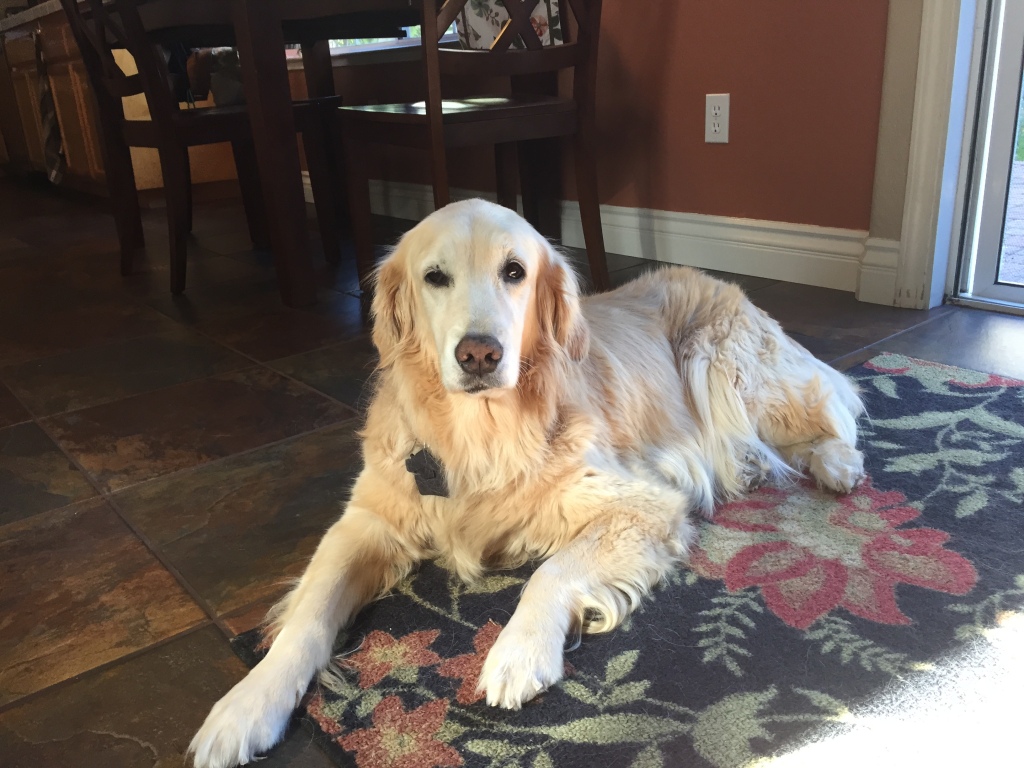 If I only had another biscuit

But who can deny a cute kid or a pupster their heart’s desire? Such a sweet face. Even an old crusty like me would be reaching into my pocket for Ms. Kali! 🙂

She is definitely hard to resist!

Thanks Cheryl and thanks for following Golden Kali!

Never under estimate a devious dog (or offspring!). 🙂

You got that right Colin! 😉